The Drone - An Unsung Hero of the Chennai Floods Rescue Operations

The recent Chennai floods and its aftermath saw the emergence of many Good Samaritans in the role... 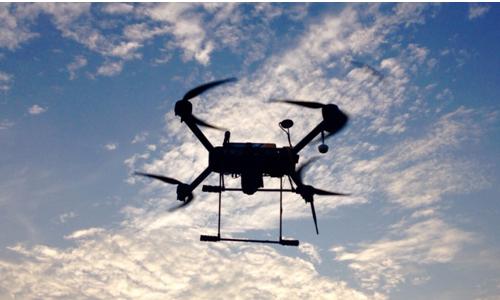 The recent Chennai floods and its aftermath saw the emergence of many Good Samaritans in the role of volunteers, the defence and police personnel, disaster rescuers, helping bystanders, shelter providers, donors, and establishments that came forward with food, shelter, clothes and other essentials for living.

The rescue operations that began almost as soon as the waters rushed into houses, was a challenging mission as floors got inundated and people scaled the storeys to terraces, waiting and waving for rescue. Many more were huddled in dry nooks and corners of the houses, helpless and hoping for help to come their way. 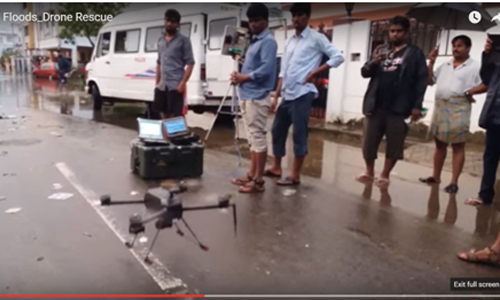 In this mayhem, one silent rescuer that played a major role in the operations was The Drone or the UAV (Unmanned Aerial Vehicle). The Drone is a remotely controlled vehicle that can span across low heights, scanning the earth below through its camera. The Drone, developed by the Research Centre for Aero Space, Madras Institute of Technology (MIT), Anna University, Chennai was extensively used during the Chennai floods to detect people stranded in inundated buildings, where rescuers and boatmen could not access. The Drone was operated by the Team Dhaksha, a relief team which was constituted in 2004 jointly by MIT and the Chennai Police, for relief work using the Drone. Mohammed Rasheed and Krishna Kumar are the technical supporters from MIT under the leadership of Dr. K. Senthil Kumar, Professor of the Research Centre for Aero Space, MIT. The team from MIT that assisted the Chennai Police as Team Dhaksha during the Chennai floods were Rushender Babu, Kalaiselvan, Ramprasad and Muthu. T K Rajendran, Commissioner of Police (COP), Chennai took personal interest and closely monitored the operations with his team.

Incidentally, the late Dr APJ Abdul Kalam, India's former President, and space scientist was an old student of MIT and an alumnus of this Department.

The Chennai floods had posed a precarious situation, where there were volunteers and rescuers available with their boats, but inability to connect with the stranded to rescue them. The Drone came into assistance here for scanning flooded areas to spot the stranded. The rescuers were then remotely guided through to the specific spot for rescue. It is commendable to mention that more than 1000 stranded people were rescued during the Chennai floods, with the exclusive help of the Drone to spot them.

To cite an instance, there was a mother who was away from her home, where her two children and her 75-year-old mother were stranded inside. She was helpless for two days, with no idea how to reach her family to rescue them. With the help of the rescue team that employed the monitor and the Drone, the mother was able to identify her house, using a visual landmark, located through the Drone. The rescuing boatmen were then directed and guided to the affected house, to rescue the three members who were huddled in a corner inside the house waiting for help. Thus, many families in remote places could be located through the monitor of the Drone, without the family member having to accompany the boatmen to locate the house.

Another instance was that of an IT professional who could not access his family stranded in his house. He could pinpoint the location of his house with latitudinal and longitudinal specifications that he was aware of. The Drone could locate the house using these specifications and rescue the family. Stranded neighbours too could be reached with the help of the rescued family, and in turn rescued.

Incidentally, the Drone had also played a major role during the June 2013 Uttarakand floods, rescuing thousands of stranded people. The Drone has also been used for spotting people buried in building collapses. For this purpose, thermal cameras were fitted to the drone to detect body heat that is transmitted as thermal images to the monitor for identification of life to be rescued. 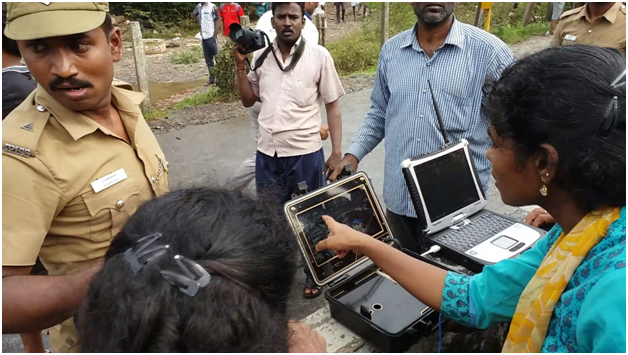 The drone used in the Chennai floods is a quadruped UAV (Unmanned Aerial Vehicle), equipped with a camera to record live images of the place it covers. The drone is operated by two men, one for managing it using the remote video terminal, and the other for monitoring the video images as well as database of the drone. The monitor displaying the images from the remote camera is a commercially available monitor called Toughbook. The other monitor displays live database of the drone such as its 'health', its distance from base, and the life of its battery. The remote video terminal has the facility to manoeuvre the drone for take-off and landing, to manoeuvre it. The drone is able to hover over a particular spot. The camera on the drone can be manoeuvred as well as zoomed from the terminal. The battery in the drone runs for 35 minutes. There is a back-up of 10 batteries for the drone.

The Drone can be used for other purposes as in agriculture to assess cultivation, and to spot specific areas of cultivation affected by disease for specific treatment. Spraying of fertilisers and pesticides over the crops can also be managed by the Drone. The drone can be used in forestry, to detect forest fires and deforestation. It is useful for mapping areas. It can be used for cattle inventory over a large area. The drone technology can save lives in scenarios where nature is highly destructive. Team Dhaksha has proved its capability in assisting people in Dull, Dangerous and Dirty (3 Ds in Disaster Management) places where no other human being could approach.

It is a matter of pride that India has the capability to make its own customised drones for local use as against imported models that might be useful for universal use, and not be customised for local use. As PreSense salutes the many unsung heroes who came to the forefront for rescue operations during the recent catastrophe, we also acknowledge the role of the silent Drone that played a pivotal role in rescuing many more of the stranded people during the Chennai floods. (Dr Senthil can be reached at ksk.mit@gmail.com)