Home » Youth Corner » "Join politics only after understanding the problems of the country and society" - T K Rangarajan, Member of Parliament

"Join politics only after understanding the problems of the country and society" - T K Rangarajan, Member of Parliament 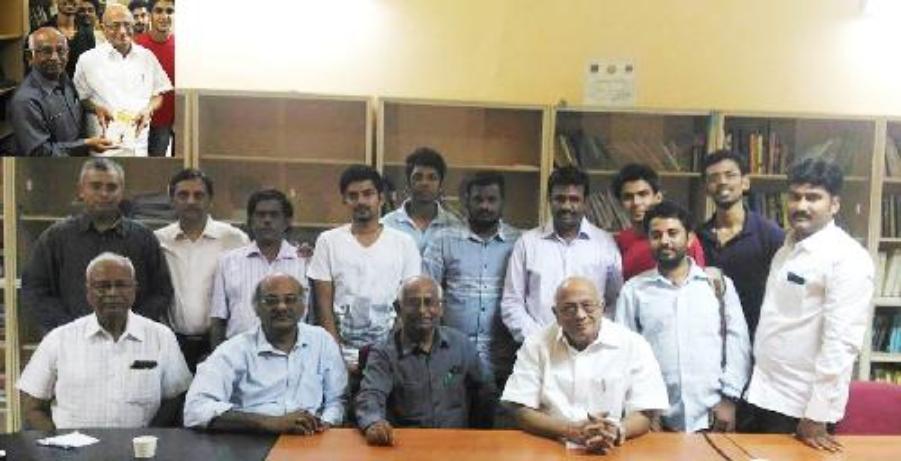 The ezine PreSense (Published by Prime Point Foundation) and Sansad Ratna Awards Committee organised an interactive session with Rajya Sabha CPIM MP T K Rangarajan on Saturday the 22nd October 2016 at HSS Library, IIT Madras. It was a closed session with select invitees who aspire to join or grow in politics.

T K Rangarajan is one of the well respected political leaders in India for his balanced and intellectual views. Though he is a communist leader, he has more admirers in all the parties, including BJP, irrespective of political ideologies.

, He also traced the history of politics. He defined the politics as the 'concentrated economy'. He said that in the world all the wars have happened with focus on 'properties'. He also quoted from Ramayana and Mahabarata, as to how the desire to acquire property had led to dispute and war.

He also explained as to how the economy changed in the past centuries. Last century changed the 'barter trade' to 'merchant trade'.

He raised a thought provoking question to the audience. Thousands of years ago, India had great scholars like Aryabatta, Bhaskara. Also India gave 'zero' to the world and we had great mathematicians. In spite of the ancient wisdom, India did not attempt industrial revolution. But it happened only in London. He explained as to how the religion prevented industrial revolution even in England and how it was overcome. He concluded that any religion cannot stop the growth of science and technology.

To a question who was his Guru, he said that as an industrial worker, he learnt many things from workers. His leaders guided him in politics.

To another question on the linguistic partition of India, T K Rangarajan said that before Independence, Madras Province consisted of Tamil Nadu, Andhra, Kerala and Karnataka with Madras as Head Quarters. Though the four states were under Madras Province, the Congress Party had the Presidents based on the language only. Hence, he said that though officially the states were under single province, practically, they had linguistic division, even prior to independence.

In appreciation of the discussion, the participants honoured T K Rangarajan with standing ovation.