The 2014 assembly polls had the odds stacked against the charismatic Tamil Nadu film star turned...

The 2014 assembly polls had the odds stacked against the charismatic Tamil Nadu film star turned politician selvi J Jayalalithaa. Political pundits wrote her off. Pre- election forecasts by psephologists and some TV channels predicted defeat giving her arch rival, the DMK, a triumphant return, which got 98 seats with allies against AIADMKs 137 with allies in a 234 member house. .

All of this was however proved wrong as Jayalalitha sailed to power with a comfortable majority to rule for a 2nd second consecutive term. She had sown a sweeping mandate in 2010-11 polls but in 2014-15 she had her numbers reduced but still got the comfortable majority.

How did she win? Her image was sought to be tarnished through the assets disproportionate case with the first verdict going against her only to be overturned by another judge. The unprecedented floods and failure of TN govt to provide timely relief put her under fire.

But the unparalleled success of her social welfare schemes that went under the brand name of AMMA ( Mother) returned her to power as she surmounted all criticism. The most popular scheme Amma Canteen fed a huge population at subsidised rates with idlies as low as rupee per plate. Most poor households stopped cooking at homes relying on the canteens for their breakfast, lunch and dinner. For Rs 15 one could eat a belly full, the same stuff cost over Rs 200 to Rs 250 in a restaurant.

Most of the social welfare schemes were Amma branded. Opposition , DMK, raised strong opposition on grounds it was unethical and illegal to brand a govt scheme under a individuals name. But none bothered. Some of the schemes are :'Tamil Nadu Village Habitation Improvement' (THAI, which in Tamil means Mother or Amma) ), "Amma Unavagam" (canteens that serve subsidised food), Amma Kudineer (drinking water scheme, at Rs 10 a bottle it gave a run for the money to popular Aquafina of Pepsi and Kinley of Coke and Bisleri) , Amma laptops, 'Amma Magapperu Sanjeevi' ('Amma Baby Care Kit') and 'Amma Arogiya Thittam' (Amma Health Scheme). People simply adore these products/services as evidenced by the crowd at the canteens, which are most hygienic prompting other CMs to send experts to study and replicate the same in their states. Amma Kudineer gets sold out in minutes at the state's inter state bus terminals. Amma's 'Gold for marriage" was a scheme stated in AIADMK's 2006 manifesto and implemented when she came to power in 2011. Named after social activist Moovalur Ramamirtham, the scheme sanctions four grams of gold and cash up to Rs.50,000 to economically-backward women on completing their degree or diploma courses.

Jayalalithaa had promised to raise the amount of gold to one sovereign but didn't live long enough to fulfil the promise to the chagrin of her admirers. The popularity of the schemes and the desire for their continued existence weighed heavily in the minds of voters prompting many to return her to power despite the powerful campaign against her on corruption and alleged failure to provide flood relief.

Now the same question disturbs the minds of the people. Can the populist schemes survive her death since the people don't see an efficient political administrator to manage them as effectively and as efficiently as she did?

Jaualalitha had some 18 populist schemes going at the same time that caused the state exchequer a whopping sum. How does the state raise the revenues for them? It requires an extraordinary CM of Jayas calibre to fund, manage and run them efficiently. AIADMK's political future is greatly dependant on the schemes survival. 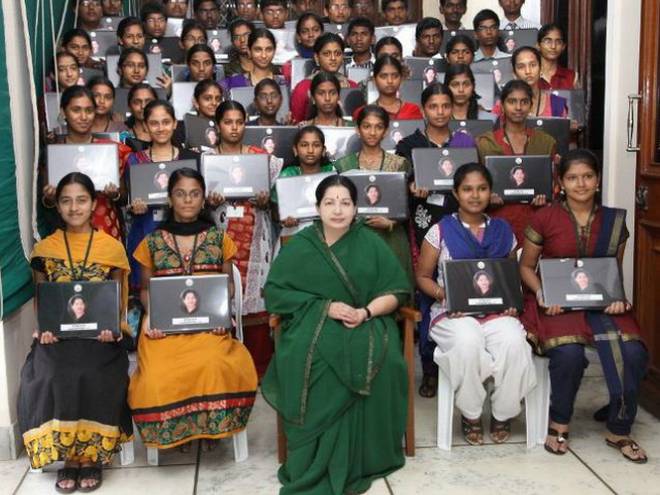 Jayalalitha funded all these schemes and subsidised them from the huge money earned through excise revenue from liquor sales through state owned shops under TASMAC. An estimated Rs 30,000 to Rs 40,000 crore was garnered by excise levies by the state annually. Opposition sought to disrupt these revenues with a campaign to close down liquor shops and have prohibition introduced.

Economists say the state faces a financial crunch with its debt rising to a phenomenal Rs 2 lakh crore. Some call this a ticking "Debt Bomb" that needs to be diffused. An analysis by a financial agency says TN's debt has witnessed a 92% rise in five years ending 2015. RBI figures show TN registered the highest gross fiscal deficit among all states in 2015-16 at Rs 31,830 crore. For current fiscal the TN government has pegged its fiscal deficit at Rs 40,534 crore or 2.96% of GSDP. Jayalalithaa has in the last five years of her reign increased the debt level of Tamil Nadu to 105% from Rs 1.14 lakh crore to Rs 2.35 lakh crore.

Only Haryana has beaten TN with a 141% rise in public debt. In other industrial states Maharashtra and Gujarat debt level increased by 64.5% and 60.3% respectively. But tax revenues in TN have not increased dramatically to balance the budget. According to 2016-17 TN budget, the tax revenue is estimated to increase to Rs 90,691.87 crore in revised budget estimates for 2016-2017 from Rs.86,537.70 crore as per the revised estimates for 2015-2016.

No doubt Jayalalithaa if alive would have pulled a rabbit out of the hat to balance the budget. Does Pannerselvam have the ability to continue the scheme and sustain them at levels that does not push the state to near bankruptcy is the question. Bureaucrats that helped Amma will help him too. But an uncertainty certainly casts a shadow over the Amma Schemes.