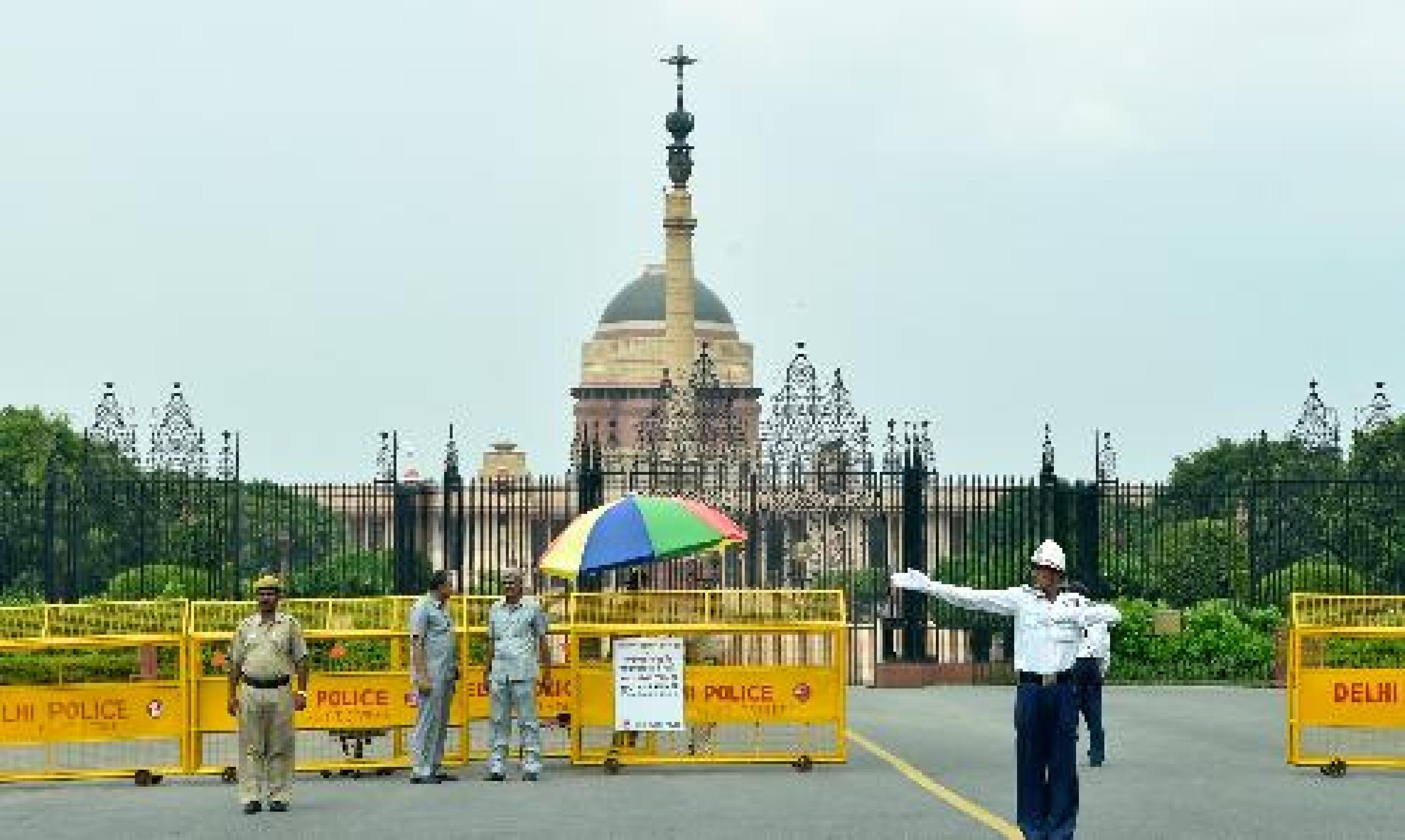 Elections for the 14th President of India will be held in July 2017, with Members of Parliament (MPs) from Rajya Sabha and Lok Sabha exercising their franchise. Besides, Members from the Legislative Assemblies (MLAs) of all the States will also cast their votes in the hotly contested presidential election between Ram Nath Kovind of BJP-led NDA and Meira Kumar of Congress-led opposition.

India has adopted the Parliamentary form of democracy, where the President is the 'Head of the State' and he governs the nation, based on the advice of the 'Council of Ministers' headed by the Prime Minister. The President is the first citizen of India and also the Supreme Commander of the defence forces. The President is vested with executive, legislative, financial, judicial and emergency powers under the Constitution.
In situations like a political crisis and a hung Parliament, the role of the President becomes crucial and most significant. For this reason, the President has to be free from all political affiliations. He is expected to act with complete constitutional rectitude and impartiality. The nation is expected to benefit from his able leadership and constructive role. The President of India is the symbol of national unity, the magnet of loyalty and the apparatus of ceremony.
While the Prime Minister, the Council of Ministers, the Parliamentarians and the Legislators take the oath 'affirming to bear true faith and allegiance to the Constitution of India', the President of India takes an oath to 'preserve, protect and defend the Constitution'.
Process of Election
The Presidential and Vice-Presidential Elections Act 1952 details the election process. Any Indian citizen, who has completed 35 years of age, can contest for the office of the President of India. He should be someone who is eligible to be a member of Lok Sabha. He should be proposed and seconded by a minimum of 50 eligible electors while submitting the nomination. The security deposit for filing the nomination is Rs.15,000/-.
The President is elected by the electoral college of the elected members of both the Houses of Parliament and State Legislatures, including the Union Territories of Delhi and Puducherry. The election process is unique. Every elector has a unique value for his vote. Members of the Legislative Assembly (MLAs) of different states have different values, based on the population of that state and the number of elected legislators. All the Members of Parliament (MPs) of Lok Sabha and Rajya Sabha have the similar values.
Calculating the Value of Electors
The value of the vote of a member of a State Legislative Assembly is calculated by dividing the population of the State (as per census 1971) by the total number of elected members of the Assembly, and then divide the quotient by 1000. After arriving at the value of all the State Assemblies, the value of each State Assembly is worked out by multiplying the number of elected seats in the Assembly by the value of votes for each member. The total value of all the State Assemblies are added together.
This figure is divided by the total number of elected members of Parliament (Lok Sabha 543+Rajya Sabha 233) to get the value of votes of each Member of Parliament.
Presently, the value of the vote of one MP (Lok Sabha or Rajya Sabha) is 708. Every Member of the Legislative Assembly (MLA) in Uttar Pradesh has the highest value of 208 among all the State Assemblies. The MLAs from Sikkim have only a value of 7.
The total value of all the electors (4129 MLAs and 776 MPs) is 1,098,882. If a candidate has to win, he/she should get a minimum of 549,442 votes.
As the Presidential election is held in accordance with the system of proportional representation by means of the single transferable vote, every elector has as many preferences as the candidates contesting the elections. The winning candidate has to secure the required quota of votes to be declared elected, i.e. 50% of valid votes polled +1.

How the Elections Are Held
Elections are held in the premises of State Assemblies and in the Parliament. Ballot papers are printed in two colours viz. green and pink. Green is used by Members of Parliament and pink is used by Members of State Legislative Assemblies. The ballot papers have two columns. The first column contains the names of all the candidates. In the second column, the electors have to mark their preference, say 1,2, 3 against each candidate.
How the Ballot Papers are Counted
All the ballot boxes are taken to Delhi for counting. Firstly, the invalid ballot papers are removed. In the first round, the valid ballot papers are distributed to the candidates, based on the first preference marked by the electors against each candidate. Since the value of each ballot varies, the counting officials will carefully calculate the value of the votes obtained by each candidate through first preference, by taking into account the value of each ballot of an MP or MLA.
The total value of votes secured by all the candidates is ascertained by adding up the value of votes secured by each candidate. This is the total value of valid votes polled in the election. This is the first round of counting.
Quota to Win the Election
The total value of valid votes is then divided by two, and one is added to the quotient so obtained, ignoring the remainder, if any. The number so determined, is the quota, which a candidate should secure to be declared elected. If the total value of the votes credited to any candidate at the first count, is equal to, or greater than the quota sufficient to secure the return of a candidate, he is declared elected by the Returning Officer. If, however, after the first round of counting, no candidate secures the requisite quota, then the counting proceeds on the basis of a process of elimination and exclusion. 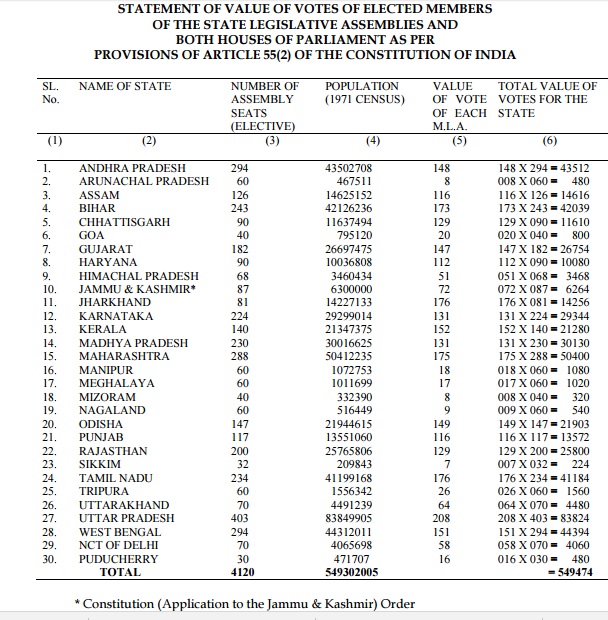 Process of Elimination and Exclusion

The candidate credited with the lowest number of votes is excluded and all his ballot papers are distributed among the remaining (continuing) candidates on the basis of the second preferences marked thereon. The value of such transferred ballot papers will be the same as the value at which the excluded candidate received them. The ballot papers on which second preference is not marked is treated as exhausted ballot papers and shall not be further counted, even if the third or subsequent preferences are marked thereon.
If no candidate secures the requisite quota, then the process of counting will continue on the same basis of elimination and exclusion, till a candidate secures the required quota of votes. In case, even after the exclusion of the candidates receiving the lowest number of votes, no candidate secures the requisite quota and ultimately one candidate remains as the lone continuing candidate, he is declared elected even if he fails to secure the quota sufficient to secure the return of a candidate.
Election Process for Vice President of India
Any Indian citizen who is above 35 and who is eligible to become a member of the Rajya Sabha, can contest for Vice President. The Vice President is the Ex-Officio Chairman of the Rajya Sabha. The Vice President is elected by the members of the Lok Sabha and the Rajya Sabha (elected and nominated members). A minimum of 20 eligible electors should propose and a minimum of 20 eligible electors should second the nomination. Presently 790 members are eligible to elect Vice President.
The Vice President is also elected by means of a proportional representation, using the single transferable vote. The eligible electors rank the candidates in order of preference, as is done in the case of Presidential elections. They will mark '1' in the blank space next to their first preference, and '2' in the blank of their second preference.
But only the Members of Parliament can elect the Vice President. The total number of votes is divided by 2, plus 1 to get the eligibility for the candidate to win. The counting process is done as in the Presidential election, based on the first preference in the first round and second preference in the second round, etc.
Presidential Election 2017 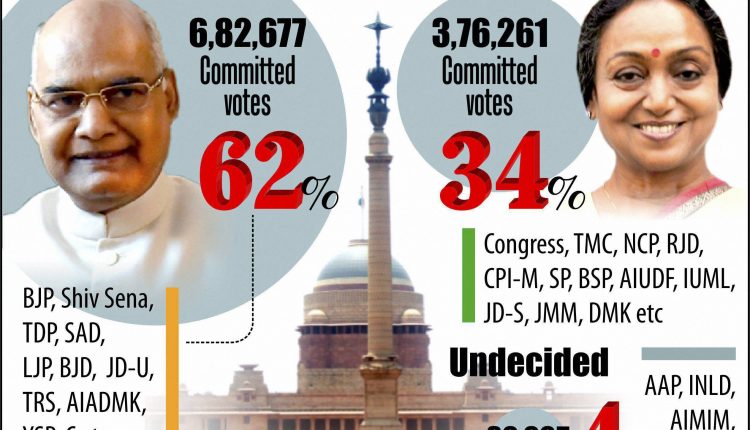 Presently, Shri Ramnath Kovind, Former Governor of Bihar (nominated by NDA) and Smt Meira Kumar, Former Speaker of Lok Sabha (nominated by UPA) are in the race for the Office of the President of India. The parties should not issue whips to their members, and the electors are expected to vote as per their conscience. Since NDA is said to score more than 60% of the value of votes, Shri Ramnath Kovind is likely to become the 14th President of india.
As we are writing this article, the Election Commission has also notified the election process for Vice Presidential election.
By Sukruti Narayanan, Editorial Team
(From Syydney, Australia)
Tags
President   Vice President   Election Commission
Follow