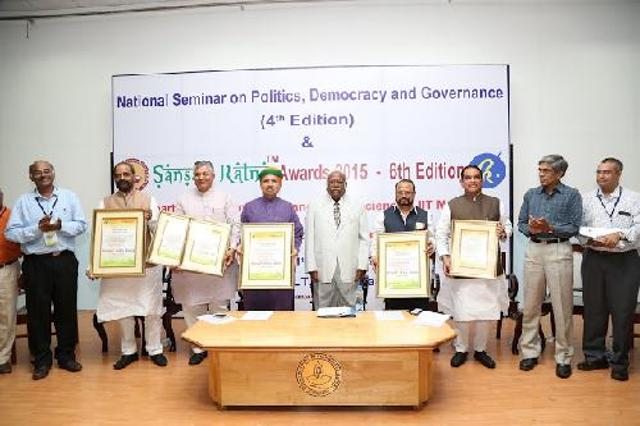 The following 3 Parliamentarians received Sansad Maha Ratna Award for their 'consistent' performance during the 15th Lok Sabha in their respective category.

Shri Hansraj Gangaram Ahir - 4th time BJP MP from Chandrapur, Maharashtra. He is now the Minister of State for Chemicals and Fertilisers. He ranked No 1 for introducing 'Private Members Bills'. He introduced 31 Private Members Bills and secured a Total Tally of 1150 in the 15th Lok Sabha. He attended 72% of the sittings in the 15th Lok Sabha. He is also the whistle blower for the Coal Scam.

Shri Shrirang Appa Barne – 1st time Shiv Sena MP from Maval, Maharashtra. He ranks No 1 for 'Raising Questions' during the first year of the 16th Lok Sabha till the end of Budget Session 2015. He raised 314 Questions with Total Tally of 355. He attended 87% of the sittings. He ranks No 2 for Total Tally in the entire Lok Sabha.

During the first session of this National Seminar, Shri Srinivasa Prabhu, Director of Lok Sabha Secretariat gave a presentation on the 'Indian Parliamentary System' and explained the functions of the Parliament.

At the end of the event, all the team members of organising committee were introduced to the audience.

We will separately upload some of the important speeches for the benefit of readers.

Complete set of photos (1200 plus) may be seen and downloaded from here.