Productivity The monsoon session of the Indian Parliament concluded on 12th August 2016. This...

The Rajya Sabha spent 52% of its time, and the Lok Sabha 40% of its time on discussing issues such as inflation, and atrocities against the Dalits. The recent incidents in Kashmir were debated upon for a total of 16 hours, in both the Houses. The Parliament has been discussing several issues regularly, since 2004. These include internal security (50 instances), inflation (34) and natural calamities (32).

The Parliament passed 14 Bills during the session. These include a Constitutional Amendment Bill to enable the levy of GST (Goods and Service Tax). The Parliament discussed this Bill for a total of 20 hours, across two Parliamentary sessions. 14 Bills were introduced of which seven were passed during the session. These include the Lokpal and Lokayuktas (Amendment) Bill, which was passed in less than half an hour in each House. The Taxation Laws (Amendment) Bill and the Maternity Benefits (Amendment) Bill were introduced and passed by one House on the same day.

Top Three Performers – All from Maharashtra

The top three performers of the Lok Sabha for the period up to the Monsoon Session 2016 between 1st June 2014 to 12th August 2016 have been identified. (Note: For our review and Sansad Ratna Awards, only originally initiated debates are considered. Associated debates are excluded).

Shri Srirang Appa Barne (Shiv Sena, Maharashtra) ranks No 1 with a total tally of 684 for initiated debates, private members bills and questions. He participated in 71 debates, introduced 8 private members bills (PMB) and raised 605 questions. He secured 91% attendance and participated in 8 out of 19 meetings (42%). Incidentally, he is a member of the Defence Committee.

Smt Supriya Sule (NCP, Maharashtra) ranks No 2 for the total tally. She participated in 49 debates, introduced 8 PMBs and raised 619 questions and has a total tally of 676. She has secured 94% attendance. She is member of 3 Committees (External Affairs, Office of Profit and Empowerment of women). She attended 17 meetings out of 63 committee meetings (27%).

Shri Rajeev Shankarrao Satav (Congress, Maharashtra) ranks No 3 for the total tally. He participated in 65 debates, introduced 10 PMBs and raised 565 questions, reaching a total tally of 640. He secured 84% attendance in the House. He is member of 3 Committees (Defence, Land Acquisition bill, Welfare of Other Backward Classes). He attended 32 committee meetings out of 50 meetings held (64%).

Interestingly, all the above three top performers are from the State of Maharashtra. Shri Shrirang Appa Barne and Shri Rajeev Shankarrao Satav are already Sansad Ratna Awardees of the 16th Lok Sabha. 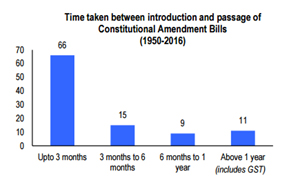 This ezine PreSense honours outstanding Parliamentarians with the Sansad Ratna Awards under various categories like Debates, Private Members Bills, Questions, Overall Tally, Women Category, First Time MP Category, etc every year after the Budget Session. Three Sansad Maha Ratna Awardees of 15th Lok Sabha are currently judges of the Selection Panel. Besides being the topper, a minimum of 70% attendance in the House as well as in the Committee Meetings are stipulated to become eligible for the Award.