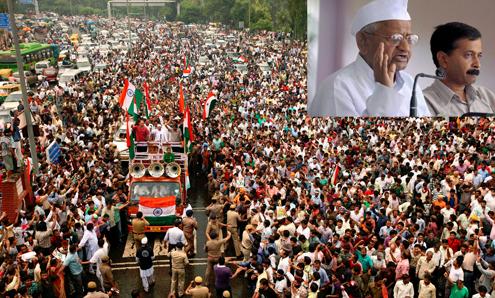 In August 2011, nation witnessed a grand and unprecedented Anti corruption movement led by Anna Hazare. Many political leaders including Arvind Kejriwal, Mayavati, Mamta, Karunanidhi, Mulayam, Sharath Yadav, Sharad Pawar, Sonia Gandhi and others supported this movement openly and even many of them shared platform with Anna Hazare. These leaders demanded immediate action to eliminate black money and corruption. The nation was emotionally charged. The whole nation exhibited massive anger against corruption and black money.

Five years later, when Modi announced demonitisation of higher denomination currencies on 8th November 2016, to clean up the black money and fake currencies, the same leaders are now ganging up against the initiative and even demand roll back of the orders. Their body language exhibits nervousness and fear. In spite of all the inconveniences, common man understands the purpose of this historic decision to ban higher denomination currencies, to remove the black money and fake currencies from the circulation.

The TV channels owned by black money holders, mafias and politicians purposely create panic among the viewers, as if everything is wrong. Demonitisation announced by Prime Minister is a massive clean-up and game changing operation and many corrupt corporates, politicians, bureaucrats, media houses are affected. They want to stop this operation, under the pretext of the inconvenience to common man. If common man's inconvenience has to be reduced, 'roll back' is not the solution.

Demonitisation in the past

If we look at the history, this is the second time, that Indian Government has demonitised the higher denominations. In 1970, Indira Gandhi appointed Justice Wanchoo Committee to examine the black money and tax evasion. Though Indira Gandhi did not circulate the final report, it got leadked. The Committee then recommened demonitisation of 1000 and 5000 rupee currencies. For many reasons, even the strongest Indian Prime Minister Indira Gandhi did not take any action on the report.

In 1978, the Janata Government under Morarji Desai demonitised the higher denomination currencies. During those time, 1000 or 5000 rupee currencies were beyond the reach of common man.

Due to corruption at political and bureaucratic levels, the generation of black money and money circulation have gone up several times. According to the World Bank report 2010, the shadow economy in India was 23.6% of GDP in 2007. In our view, it might have gone up to 30% or more in 2016.

There are three methods through which this black money economy thrives in India.

The black economy prevents the growth of the nation and the development. India has to hang her head in shame at the global level.

Modi Government has taken several steps silently to curb black economy. They announced amnesty scheme to convert the black money into taxable money. This brought around 65,000 crores into the system.

In March 2016, the currency circulation remained at 16.41 lakh crores registering a growth rate of 28% within two years.

Economists attribute the spurt in higher denomination currencies to the inflation, growth of economy and also corruption.

Within a few days of the announcement, the impact is visible seen. The most important is the blocking of fake currencies to fund terrorists. Kashmir is silent after the announcement. The efforts put in by the dedicated Bank staff and the postal staff deserve 'standing ovation'.

When the Prime Minister Modi demonitised the higher denomination currencies, 86% of the currencies became invalid. Many of the politicians, corporates, mafias, terrorists, black money holders and hawala operators felt the heat and could not tolerate this sudden announcement. They started running like 'headless chicken'. Somehow, they wanted to stop the scheme. Now they have formed an unholy alliance to create panic among the people.

It is not sure to what extent the corrupt bureaucracy and the corrupt politicians within the ruling party and the system will work tirelessly to make the scheme successful.

Though the Prime Minister is reported to have been planning this operation for the past six months, the very fact that the common people have to suffer for the past 7 or 8 days, without sufficient small denomination currencies, proves beyond doubt the casual attitude and poor planning of Finance Minister Arun Jaitley and the Senior Finance Ministry Bureaucrats in implementing the historic decision. Smaller denomination currencies could have been moved within two days with the help of Army to all parts of India. Probably, they want to create confusion and bring bad name to the Prime Minister.

Modi has to fight a lone battle

Various surveys reveal that 80 to 90 percent of the citizens welcome this initiative. On the other side, corrupt bureaucracy, politicians and vested interests, including some media are trying to create negative vibrations due to self interest, fear and nervousness. Notwithstanding the huge hindrances, this Scheme has to be implemented successfully in the interest of the future generation.