When we fire crackers during Diwali and other festival days or when we use a match box to light a... 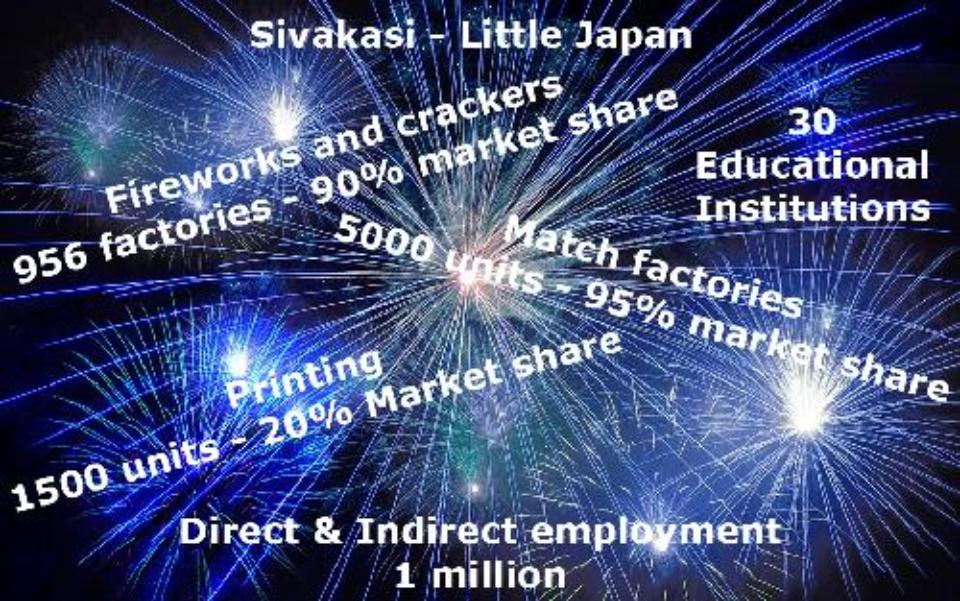 When we fire crackers during Diwali and other festival days or when we use a match box to light a candle or a stove or when we receive New Year diaries and calendars, we seldom recognise that these products were made in a small South Indian town Sivakasi, nearly 200 kilometres from the southern tip of our country. Presently more than 95% of fireworks and crackers and 90% of safety match boxes used by India are produced and supplied by Sivakasi.

Nearly 90 years ago, the residents of this small village of 7 square kilometre area were entirely dependent on agriculture, without any rivers in the vicinity. When the monsoon failed, times were tough for them. A near zero literacy coupled with economic backwardness made their lives miserable, since they were not required anywhere.

Two great young visionaries from Sivakasi – Ayya Nadar and Shanumga Nadar went to Calcutta and learnt the techniques of sulphur match. They started making the first sulphur match in 1923 at Sivakasi. The sulphur match would burn when struck against a rough surface. Then they started making the present form of 'safety match' in 1932. This is the humble beginning of the 'Journey of Sivakasi', which was described as 'Kutti Japan' (meaning Little Japan) by Pandit Jawaharlal Nehru in the later years. Sivakasi has now become a hub of the fireworks industry in the world, second only to Liuyang, the Chinese fireworks city.

When all the centres of India display 'No vacancy board', Sivakasi welcomes uneducated and unskilled labour and train them.

Presently 956 factories operate with approved licences, of which nearly 550 factories have the licence of the Central Government to handle more than 2000 kilograms of chemicals at a given time. It is estimated that nearly Rs.4000 crore (Rs.40 billion) of fireworks/ crackers are marketed through these licensed factories every year.

Nearly 25% of the fireworks factories also produce 'matches'. Since the process is less risky, the licensing formalities are easier. Nearly 5000 units produce 95% of the safety matches required for India. They also export nearly Rs.400 crore (Rs.4 billion) worth of match boxes.

Interestingly, both fireworks and match industries do not require a large amount of water and electricity. They are all done manually. These industries enjoy the required climatic condition too.

In addition to handling chemicals, several jobs like paper tube making (for crackers), printing of labels, packing materials, etc. provide large-scale employment opportunity to the local people. In order to print their own labels, the industrialists purchased printing machines and developed their capacity to print diaries, calendars, text books, etc. Twenty years ago, Sivakasi was catering to nearly 80% of the country's printing job, Nowadays, due to technological growth, Sivakasi contributes to only 15 to 20% of the nation's printing job. Today, nearly 1500 printing machines provide direct employment to 20,000 persons.

60% of the production of fireworks and crackers are used during the Deepawali season and the rest are used across the country during other occasions like Holi, weddings, political meetings, etc. throughout the year. 4480 permanent shops and more than one lakh (100,000) temporary shops (for Diwali season) across India have been licensed to sell fireworks and crackers. Fireworks/crackers are manufactured throughout the year.

Though the Government has stipulated strict conditions for this hazardous industry, it is reported that many people due to their greed violate the norms in order to increase production. Many people produce fireworks and crackers in unlicensed premises, flouting safety methods. This leads to accidents. During the past 16 years since 2001, 350 deaths have been reported due to accidents with an average of 20 deaths per annum. Considering the nature of this industry involving dangerous chemicals and involvement of nearly one million people, the death of 20 persons appears negligible, even though it could have been totally avoided. However, a huge hype is made about the mishaps in this industry as if this is the only dangerous industry in the country.

Some Non-Government Organisations (NGOs) funded by some foreign countries create an impression among the people across the country that compel them to boycott fireworks and crackers due to deaths, child labour and environment pollution in this industry.

Our Editorial Team visited Sivakasi in the last week of March 2017 and interacted with various owners, labourers, Government officials and people. The Team also attended the awareness programme organised by the Government jointly with The Tamil Nadu Fireworks and Amorces Manufacturers' Association (TANFAMA), the apex body of licensed manufacturers. During this event, the District Collector confirmed that Sivakasi has 'zero' child labour.

Around 20 years ago when the industry was growing, children were used as labour in the industry. Everybody, including the Government officials now confirm that there is no child labour in the district anymore. When we visited the factories, we too did not see any child labour. "Some forces are working against Sivakasi's growth. They silently indulge in destroying the native culture of this country and the festivals. They first created an impression in the world about child labour in Sivakasi. Even the international media like BBC visited Sivakasi and confirmed that there was no child labour", said Dr P Ganesan, Spokesperson of TANFAMA. Dr Ganesan himself is the owner of a leading brand 'Vinayaka Sony Fireworks' and has more than 900 sheds.

Although Chinese crackers are prohibited in India, due to the usage of banned chemical potassium chlorate, they are still imported on a large scale by unscrupulous traders hiding them under imported toys with the connivance of some of the Government officials. These Chinese crackers flood the market during the Diwali season and are sold at very low price, even though they are banned. These crackers are not safe for use in hot countries like India. TANFAMA has been taking up this issue with successive Governments. During the past two years, these imports have reduced but they have still not been arrested completely.

Some of the NGOs have now started taking up the issue of noise pollution. The industry has regulated itself to produce crackers of sound volume less than 125dB. The sound level is managed by proper mixing of chemicals in a prescribed ratio.

After the Diwali festival of 2016, the Delhi High Court banned fire crackers in Delhi NCR alleging 'air pollution'. Later a study by IIT Kanpur and images of NASA disclosed that the air pollution was not mainly due to the fire crackers, but it was due to mass burning of agricultural waste in the neighbouring region. This mass burning has affected Lahore too, a city which did not celebrate Diwali.

After much research, some of the leading manufacturers have introduced 'fancy fireworks' to provide a variety of safe experiences with fireworks for the consumers. A majority of the factories has its own R&D set up, laboratories, quality control mechanism, etc. They also test and verify the noise level of the finished products to ensure that they are well within the permitted level. Our team witnessed the testing of the quality at every stage right from raw materials to the finished product. This facility is available at major factories. The small licensed factories do not have this facility. Some of the major factories offer their testing service facilities to small licensed factories.

Some people produce fireworks and crackers illegally in unlicensed premises. They do not have the proper facility for checking the quality of raw materials and end products. The poor quality products are pushed into the market at low prices through second level traders. All the fatal accidents happen only because of these unlicensed productions. Due to corruption and political influences, they could not be controlled. The mistakes committed by these illegal producers tarnish the image of Sivakasi.

"In 1971, Sivakasi had only 60 licensed factories with 1500 sheds. Today, we have 956 licensed factories with 40,000 sheds. In spite of all challenges, people like to enjoy Diwali and other festivals with fireworks, which is the livelihood for more than one million people. At the time of Independence, we had almost zero literacy in our area. As part of our social responsibility, major brands of Sivakasi run 7 Engineering Colleges, 4 Arts & Science Colleges, 2 Polytechnics and 15 Higher Secondary Schools where more than 20,000 students get the opportunity to study at low cost. We provide fee concession and scholarships to the children of our employees. Many of the new generation boys and girls study abroad too. Though we may run the risk of shortage of labour in future, we want our town to be positioned in the global map", said Dr Ganesan proudly.

Generally all the industries in India offer a one month bonus to their employees once a year. Here at Sivakasi, all the factories give bonus amounting to five and half months' salary twice a year, to coincide with Diwali and other local temple festival.

Since the industry involves the livelihood of one million people throughout the year, the Government has to ensure that all illegal and unlicensed producers, who cause harm to the reputation of the industry are dealt with severely. Dr Ganesan says that if GST is pegged at a minimum level of 12%, even the unlicensed producers have to be brought under the legal ambit.

Safety awareness programmes should be held regularly without waiting for accidents. Wherever possible, mechanisation can be introduced. With many technology institutions around, the new generation should strive to bring creativity and innovation with better safety measures.

The nation salutes the hardworking and vibrant people of Sivakasi, who were economically and educationally most backward in 1947 and have now converted their challenges into an opportunity to position themselves in the global map.

PreSense is confident of seeing Sivakasi V2.0 by 2025.