Home » Open Ed » Parliamentary Disruptions– A Right that is Wrong

Parliamentary Disruptions– A Right that is Wrong

The recent demonetisation move by the Government has provided yet another issue for disruption,... 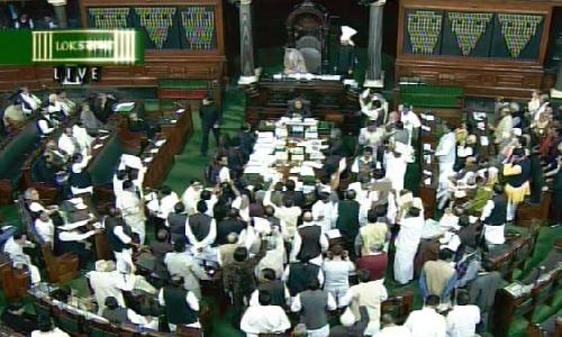 Share Post
The recent demonetisation move by the Government has provided yet another issue for disruption, pandemonium and protest walk-out by the Opposition in the two Houses of Parliament. And this brings to the forefront yet again, the ugly reality of the nuisance of disruptions and walk-outs by the Members of Parliament (MPs), crippling the functioning of both the Houses of Parliament time and again.
Both the Houses of the Parliament work for the governance of the mammoth 125-crore-large populated and complexly diversified country that India is. Therefore, every day that is lost in dysfunction is translated to crores of Rupees in loss in the short term, and multiples of that amount in the long term. The common people of India cannot afford it, and the MPs do not seem to care. There has been absolutely no accountability till date from them.
The typical excesses we observe during the Parliamentary sessions are rushing to the well of the House, shouting slogans and displaying placards, disrupting the proceedings of the House, disrespecting the Chair, and forcing adjournments.
The people of India have expressed their displeasure and disapproval of the unbecoming behaviour and unproductive disruptions, on several public platforms like the social media, television debates and talk-shows, in comic teasers ridiculing the behaviour, and during live events. The Members have so far disregarded the people's sentiments and they continue with their histrionics. Unfortunately, the Speaker of Lok Sabha and the Chairman of Rajya Sabha have had little success in enforcing House discipline and decorum.
In any organisation, be the government, quasi-government or private, employees are subject to pay cut when they strike work or fail to perform their designated duty. A similar provision needs to be introduced and ruled so that MPs are imposed a monetary penalty for non-performance of their duties. Shouting and creating pandemonium do not qualify as performance of duty. Monetary penalty is a sure way of deterring misbehaviour, be they fines for breaking traffic rules or imposition for disrupting the order of the Houses of Parliament. The question is – which authority above the Parliament and its MPs can and will legitimise such a rule for imposition?
It is strongly suspected that this misplaced hyperactivity in the Houses has been especially pronounced since the live telecast of the Parliament proceedings. May be it is high time that the cameras are switched off so that the Members get back to their seats and work.
Recently, the opposition parties justified the disruptions, saying they were giving the government a taste of their own medicine when they were in the opposition. Well, two wrongs do not make a right. When misbehavior, pandemonium and disruption are resorted to, time and again, as a matter of their democratic right, it must be remembered that every right always comes with equal if not more, of its share of responsibility, and responsibilities precede rights, always.
Wake up, democracy and rights! Smell the responsibilities! The kind of unbecoming behaviour and disruptions were certainly not in the wish list of the voters who cast their votes for their representatives to the Parliament Houses.
Susan Koshy, Editor, PreSense
Tags
Parliament    disruption    logjan
Follow