During normal life, the city people generally do not move with or interact with neighbours,... 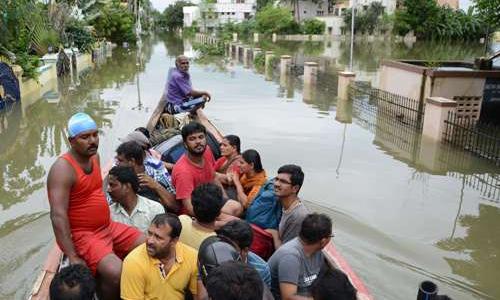 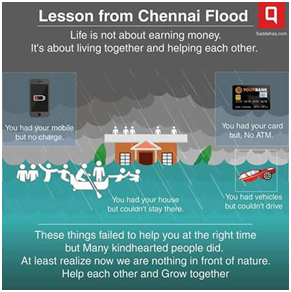 During normal life, the city people generally do not move with or interact with neighbours, attributing it to their busy lifestyle and their pre-occupation with their priorities. They tend to be self-centred and family-centred. During this critical time, irrespective of where they were or where they came from, everyone went that extra mile to help each other. During this crisis, we found three categories of people in Chennai: (1) victims (2) volunteers and (3) victim-cum-volunteer.

Chennaites realised that life was not about earning money alone. It was about living together and helping each other at the time of need. There were many instances, the people who were earning in lakhs had to cry for bread when the helicopters were flying for dropping food packets. Mobiles, posh houses, ATM cards, vehicles could not help at the time of crisis. Only kind hearted people supported each other.

'Nature is Supreme' was the ultimate message. Man is nothing before the Nature.

Meanwhile, Chennai has started recovering from the disaster, rising like the phoenix, back to its feet.

By K Srinivasan, Editor in Chief and Sukruti A Vadula, Editorial Team