Rains Unprecedented in 100 Years at Chennai

For almost a month up until the first week of December, Chennai experienced unprecedented rains,... 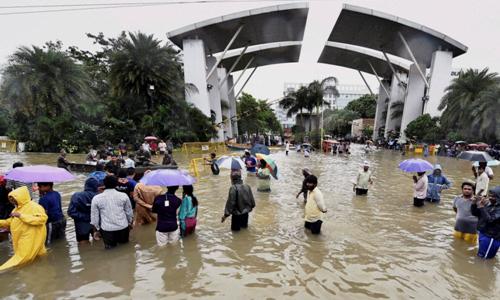 For almost a month up until the first week of December, Chennai experienced unprecedented rains, the highest recorded in 100 years. As against the average rainfall of 69 cm during this period in the previous years, this year, Chennai received 169 cms of rainfall, resulting in 'urban flooding', again the first of its kind in Chennai. On a single day, Chennai experienced a record 50 cms of rain. Most parts of Tamil Nadu State faced torrential rains and floods. Cuddalore was one of the worst affected places. This catastrophe was classified a national disaster.

Although many people across India might have read the news in the newspapers or watched it on select local TV channels, the national channels failed to give sufficient attention to the catastrophe till much later. It was only after the Prime Minister's visit, well into midst of the crisis, that the national media realised the seriousness of the situation and gave coverage. In spite of the fact that the southern states account for 60% viewership of the national channels, the national media failed to initially focus on the disaster, which had affected crores of people in Tamil Nadu. Ironically, the international media gave due importance to this disaster and aired the sympathy and support of international leaders. Officially, more than 400 people have been reported dead, while the real figure seems to be on the higher side. 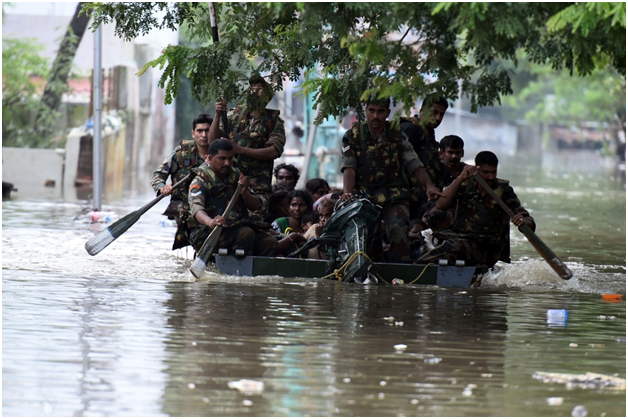 On 1st and 2nd of December, nearly one lakh cubic feet per second (cusecs) of water was reporting to be flowing through the canals. Since the water bodies are not properly maintained and also due to several encroachments, the rain water and the excess water released from the lakes began to flow along the streets of the city. Many parts of the city had 3 to 6 feet of water on the roads. Water entered the ground floor of many buildings, damaging the properties. In some places, the water level went up as high as to the first floor. The stranded people could be rescued only by boats.

Lakhs of poor and middle-classed people have incurred heavy loss of their properties (household items, vehicles, etc.). The schools in Chennai remained closed for almost a month, before reopening in the middle of December.

There were lakhs of people in the middle-class of the society who chose not to go to the relief camps, in spite of their losing much of their household properties.

Banks were officially closed during the peak floods, for two days under instructions from the State Government.

Support from the Society 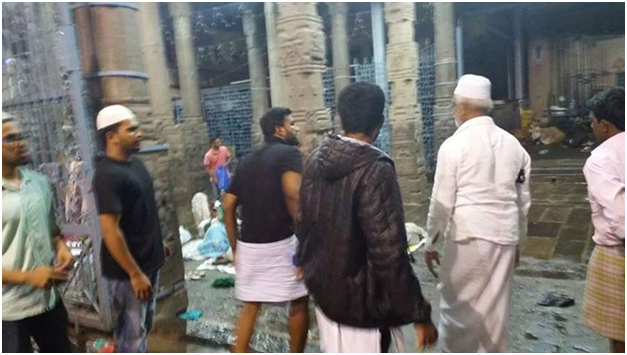 During the first week of December, when people were trapped inside their houses due to the flooding, lakhs of volunteers and NGOs spontaneously came out and rescued the victims and provided them shelter and food. The army, the navy and the air force arrived at the scene only on the following day.

While the national media was debating on the subject of 'intolerance' in the country, Chennaites displayed the highest level of 'tolerance' and support of helping each other, irrespective of caste and religion. Many Muslims and Christians were sheltered in Hindu houses and vice versa. The popular Parthasarathy Temple in the city's locality of Triplicane provided shelter to many stranded Muslims (photo above). Mosques and churches were occupied by Hindus. Several of the international media picked up this story to highlight the helping attitude of the people. Trucks of relief materials from the neighbouring states of Kerala, Karnataka and Andhra Pradesh, were rushed by volunteers to the affected people. Many people threw open their houses to total strangers who were affected by the floods.

Chennai has suffered heavily. However, its people have not lost hope. Many people had lost their houses and household properties and the trauma undergone by the people are still fresh in the memory. Fortunately, the Health Secretary of the State Government took prompt initiatives to prevent any post-flood epidemics. Chennaites are confident that the experience of this recent disaster will help them emerge stronger and more resilient.

During those dark days of the floods, when the people were suffering without electricity, transport, network and the internet, continuous support came only from the Public Sector organisations. Electricity was cut off to avoid any electrocution. The Electricity Board employees, whom we tend to find fault with for their arrogance during normal days, worked day in and day out to check all the points and transformers for faults and leaks, and to restore electricity. They responded promptly to enquiries.

There is a tendency among us to laud the performance of the private sector and nitpick on the efficiency or lack of it, of the public sector. The private sector was conspicuous with its absence during the crisis. Private cab operators suspended their operations. Only Government-owned metro buses, electric trains and metro trains operated to the extent possible. Chennai Airport was closed for a few days due to the flooding of its runway. Private operators like Jet Airways and Indigo jacked up their fare during this crisis to exploit the situation. Air India operated on a concessional rate from a temporary airport, near the city. Some of the poor auto drivers, braving the floods, helped transport children and elderly people to safer places free of cost. Employees of the private sector companies however, joined in full scale in the rehabilitation work.

Private couriers stopped their operations. Flipkart and Amazon stopped their delivery operations to Chennai. The Indian Postal Department however, braved all the challenges, and operated with admirable efficiency. During normal working days, we are disgruntled over the public sector telephone company, BSNL. We even tend to consider it fashionable to switch over to private mobile operators. During this crisis, none of the private networks (mobile and internet) such as Vodafone, Airtel, Aircel, Reliance and Idea worked. Although some of the BSNL exchanges were inundated in the floods, wherever possible, they provided the network continuously through the mobile and the landline phones. Three private TV stations suspended their operations due to flooding in their offices.

This disaster has brought out several lessons for the people in India. The extent of the catastrophe occurred due to encroachments and constructions over the water bodies and rivers. One cannot ignore or deny the extent of corruption and connivance among unscrupulous politicians and administrators in allowing this to happen. Some of the IT companies have been constructed over these water bodies. This is the state of affairs in the entire country, particularly in the major urban centres.

The disaster has also exposed the lopsidedness in the priorities for media coverage by the national channels. The local channels in contrast, did excellent coverage. Their reporters risked their safety and delved into the flood-hit areas to report live on the prevailing situations. Although the Chennaites could not access the TV channels either due to non-availability of electricity or suspension of relay from the TV stations, people of other states could view the real situation. Many of them promptly responded with their support in cash and kind, even personally coming to the rescue as volunteers.

Irrespective of the attitude of the services of local corporation sanitary workers, the electricity board employees, the metro bus crew, the railway, postal and telephone employees, and the policemen during normal working days, their attitude, participation and contribution were commendable during the recent critical situation in Chennai.

Previous instances, and the recent instance of the Chennai floods have, time and again, reiterated that at the time of crises, be it rescuing people from disaster or terrorist-hit situations abroad or within the country, be it life-threatening situations or be it even minor inconvenient situations as getting stranded somewhere or needing public support, it has always been the public sector operators, who were there in the forefront to rescue.

By K Srinivasan, Editor in Chief and Sukruti A Vadula, Editorial Team