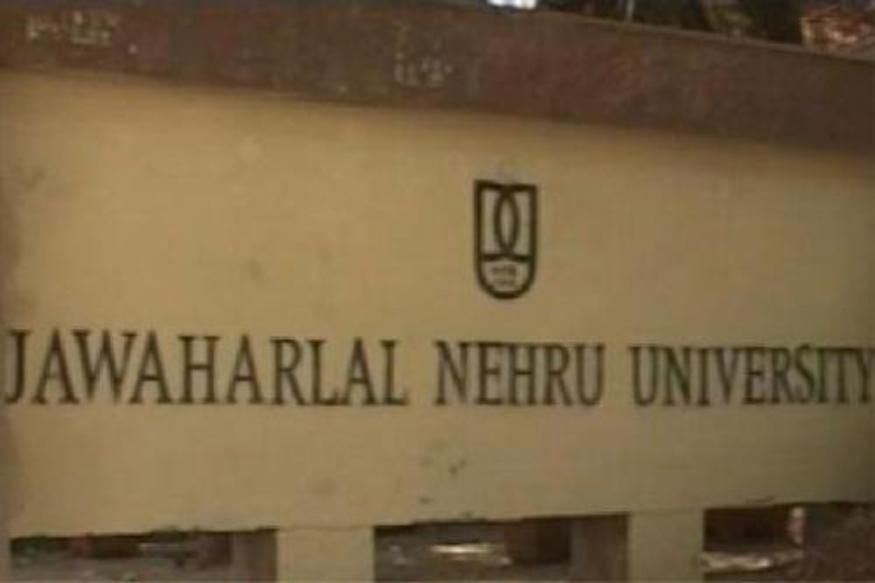 The entire media over the past 15 days, and currently the Parliament have been debating the issue of the arrest of some JNU students for alleged anti-India slogans and for glorifying the terrorist, Afsal Guru who was hanged to death for attacking the Parliament. 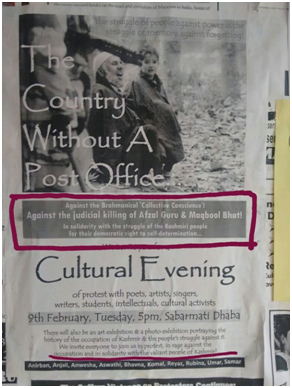 A section of students led by Umar Khalid, obtained permission from the management of JNU for a 'poetry-reading' session to be held on 9th February 2016 between 5 PM and 7.30 PM. The previous night, the group pasted posters in the campus (picture below) inviting students to the event to glorify Afsal Guru and in support of the Kashmir issue. When these plans were reported to the Vice Chancellor by another section of students, the permission was cancelled.

The gathering took place in spite of the withdrawal of permission. During the event, a group of students shouted anti-India slogans, glorified Afzal Guru and also expressed views in favour of dividing India. Student leaders like Kanhaiya Kumar, Umar Khalid and a few others were part of this event. The other section of the students who opposed these anti-India slogans clashed with them and reported the matter to the police.

The Delhi Police then entered the JNU premises and arrested the student leader, Kanhaiya Kumar. A few others, including Umar Khalid, were arrested later. This led to a serious debate nationwide, both in support and against the arrest of the students. Since the arrested students belonged to the Left political parties, the Communists and the Congress Party protested against the arrest, under the garb of 'freedom of speech'. The ruling Bharatiya Janata Party (BJP) defended the arrest for reasons of anti-national activities and sedition.

While the student leader, Kanhaiya Kumar was being brought to the Court, some angry lawyers attacked the student and some journalists. This propelled the entire opposition parties and the media (except Times Now and Zee TV) to gang up together against the ruling government. The focus was shifted from the main issue of 'anti-national slogans and glorifying terrorists' to 'lawyers attacking the journalists'. The opposition did not allow the Parliament to function. Smriti Irani made a presentation to the Parliament, elaborating on the circumstances under which the students were arrested.

As on the date of writing this article, the situation is status quo and the students are in judicial custody. The nation continues to debate upon this issue.

JNU in the Past 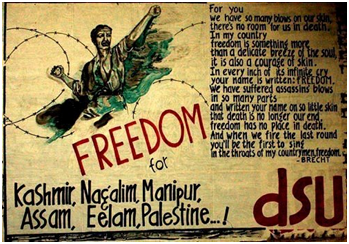 The PreSense Editorial Team spoke to many people ranging from politicians and academicians to parents and students. Every one of them was deeply concerned about the politicisation of educational institutions.

Almost since the inception of JNU, the University has been encouraging left-lenient teachers and students. Even though the University has produced many politicians and policy makers, the environment within the campus of the University is not conducive for any ideology other than the left. There were several instances of clashes in the past 20 years, which were not handled sternly by any of the previous Governments too.

Some insiders say that over a period of time the left domination has moved to 'extreme left' and then to 'ultra left'. It is also reported that Democratic Students Union (DSU), a banned front organisation of CPI (Maoist) continues to be active inside JNU. Many students with extreme views seem to be comfortably staying inside the campus for extended periods, and promoting their ideologies. It is also alleged that many of the lecturers and professors support these activities of the students, both directly and indirectly. It is also alleged that many of the teaching staff hold membership cards of the Left organisations.

Four Questions in the Minds of the Public

This incident has brought the following four issues to centre stage.

Freedom of Speech vs Sedition

According to a senior advocate, only a thin line divides freedom of speech and sedition. He says that only the effect and consequence decide the issue of sedition.

Article 19(1)(a) of our Constitution guarantees right to free speech but limits it with reasonable restriction grounds like security of the State, friendly relations with foreign states, sovereignty and integrity of India, defamation, incitement to an offence and public order. Section 2 of the Criminal Law Amendment Act 1961 and Section 124(A) of the Indian Penal Code (IPC) also restrict the freedom of speech.

The Architect of the Indian Constitution, Dr Ambedkar did not want an 'absolute freedom of speech' to be included in the Constitution. Dr Ambedkar in his concluding speech at the Constituent Assembly in 1949 said, "The condemnation of the Constitution largely comes from two quarters, the Communist Party and the Socialist Party. Why do they condemn the
Constitution? Is it because it is really a bad Constitution? I venture to say 'no'. The Communist Party wants a Constitution based upon the principle of the Dictatorship of the Proletariat. They condemn the Constitution because it is based upon parliamentary democracy. The Socialists want two things. The first thing they want is that if they come in power, the Constitution must give them the freedom to nationalise or socialise all private property without payment of compensation. The second thing that the Socialists want is that the Fundamental Rights mentioned in the Constitution must be absolute and without any limitations so that if their Party fails to come into power, they would have the unfettered freedom not merely to criticise, but also to overthrow the State."

The spirit behind the Indian Constitution and its intention is more important than its literal interpretation.

Why the Media and the Opposition Focus only on Peripherals and not the Core Issue?

Knowingly or unknowingly, a section of the media and the opposition have developed a mindset to oppose the ruling government at any cost. The opposition thus is on a constant endeavour to push the Government (irrespective of which party is at the centre) against the wall to gain political mileage. Unfortunately, in this case, in their enthusiasm to oppose the Government, they have defended students who raised anti-national slogans.

As PreSense has been persistently pointing out, the Modi Government has not put in place, proper communication strategies, to deal with crises when they occur, as in the present case. As the gravity of the news intensifies through visual and internet media, the Government has not kept pace with the flow, by providing the right information at the right time. Ruling party leaders do not speak when required; and when they do, they speak the wrong things at the wrong time. The opposition takes advantage of every such opportunity to corner the government.

The educational institutions in the country are set up by the Government to provide high-quality education and to encourage research, for the development of the nation. Parents across the nation spend their earnings to educate their children. While nobody disputes that students need to have 'political awareness', everyone opposes the presence of 'political activity' inside the campus. Unfortunately, in India, all the political parties, with their own selfish motives, have converted many educational institutions into 'political battlegrounds'. It is also alleged that many teachers in JNU are card holders of various political parties.

The Lyngdoh Committee report set up in 2006 by the Ministry of HRD under the instructions of Supreme Court prescribes minimum attendance, academic performance, age limit, clean past record without any criminal cases or disciplinary cases, etc for the students to contest election. The report further says, "However, it is not appropriate to permit the level of interference being exercised by political parties at present, as the primary function of a university is, after all, education, and not political indoctrination, especially when such political influence brings with it all the indiscretions that political parties are known for".

Handling of Communication by the Government

PreSense has been pointing out, right from the time the present Government took over, that there is no proper and proactive communication system in place, to manage the several crises it has been facing. Communication strategies assume greater importance, particularly when the visual and internet media broadcast information on real-time basis. Unfortunately, when the JNU issue erupted, the Government had sufficient reasons to defend the arrest and take severe action against the students who were shouting anti-India slogans. Unfortunately, they did not come out with timely and proper explanations. Besides, the vandalism by the lawyers in the Court diverted the attention from the main issue. What Smriti Irani and Arun Jaitley spoke in the Parliament 15 days after the event, i.e. on 24th February 2016, could and should have been done on the day after the JNU fiasco.

From the discussions the PreSense team had with many academicians, it is understood that many of the institutions of excellence are politicised centres. The JNU incident has exposed the cancer in the system. M R Venkatesh, a leading Chartered Accountant and Economist said, "We need to have a surgical intervention. A Committee headed by a sitting Judge or an Academician with members from different domain needs to be set up by the Government. The Committee can study the prevailing situation in the academic institutions and frame proper guidelines, so that the focus of these institutions is academic activities and not political activities. "

Let us not make educational institutions a battleground. They need to retain their sanctity as 'temples of learning'.