The recent debate in the media about the bad loans of Vijay Mallya and his companies has... 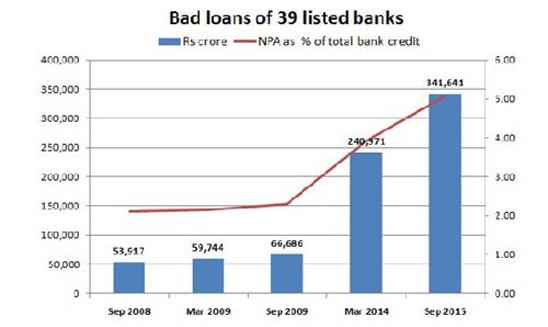 The recent debate in the media about the bad loans of Vijay Mallya and his companies has triggered awareness about the Non Performing Assets (NPA) of the Banks. Even those ordinary people, who were not aware of banking terminology have started discussing the accumulating bad debts of banks.

Presently, the banking industry (Public Sector and Private Sector Banks) has an outstanding credit portfolio of around Rs.72 lakh crore (72 trillion), of which nearly 12 lakh crore is said to be 'stressed assets', for which recovery is nearly impossible. With rescheduling and restructuring the repayments, banks show a figure of nearly Rs.4.4 lakh crore of Gross NPA.

Taking into account the Public Sector Banks (State Bank of India group and nationalised banks), the declared Gross NPA has gone up from Rs 0.54 lakh crore in Sep 2008 to Rs.3.42 lakh crore in September 2015. In other words, the total Gross NPAs of banks, as a percentage of the total loans, has grown from 2.11 per cent to 5.08 percent in the 7 years.

Since Public Sector Banks contribute nearly 80% of the total business, the alarming increase in NPA in the past 7 years has caused great concern to all. Though the reasons are attributed to global crisis, there are many other factors that have led to this alarming situation. Reserve Bank of India has given an ultimatum to all the banks to clean up their Balance Sheets before the end of March 2017. This means that a huge amount has to be set aside as 'Provision for Bad Loans', leading to erosion of capital. All the banks are likely to end up in loss during March 2016 because of huge provisions to be made for bad loans. 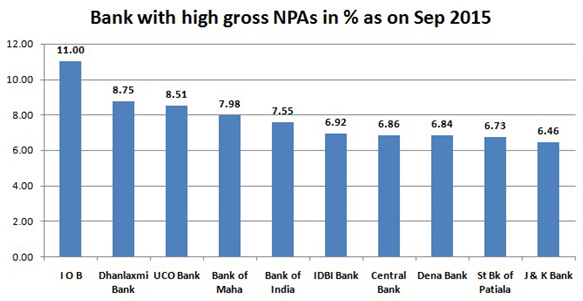 If we closely analyse the figures, we find a steep increase in the NPA in the past ten years. Although official information is not available, it is reported by banking sources that the top 100 NPA accounts may constitute around 50% of the total NPAs. This means large corporate borrowers contribute to this situation.

Since the Banking Regulations Act ensures secrecy of the customer accounts, banks will conveniently hide the information of individual accounts from the public domain. Even recently, when Supreme Court wanted the list of willful defaulters, Reserve Bank of India submitted the list to the Court with a request not to make it public, as it might affect their business.

The banks, more specifically State Bank of India, which go after small genuine education loan and agricultural loan defaulters with an outstanding loan of 10 or 20 thousand rupees by displaying their photos in a banner, seem to protect the names of big defaulters, who have cheated the bank of thousands of crore rupees, to safeguard their business.

Corruption and Quality of Appraisal

On behalf of PreSense, we spoke to many sources, including senior executives of banks, trade union leaders and advocates who deal with bad loans in courts. All of them agreed that in the past ten years, corruption had gone very high at various levels, leading to poor quality of credit appraisal. They even quoted examples of how 'powerful' political leaders influenced the banks' top managements to sanction huge credit limits to unworthy borrowers. When accountability has to be fixed, only the lower level officials are subject to harassment and punished, and not the real culprits. They also question the role of RBI and the Ministry Directors, who never intervene in such situations for reasons best known to them.

Recession and Other Environmental Factors

After September 2008, there was a global recession. It affected India too. The wilful defaulters conveniently quote the recession as the reason, to their advantage. When the Modi Government took over the government in 2014, it was reported that projects worth more than Rs. 8 lakh crore were pending or stalled for environmental clearance, land acquisition, etc. These projects have been heavily financed by various Public Sector Banks.

There is a general tendency among Indians to not care for public property. Similarly, borrowers too are generally apathetic about public money lent to them. Whether a big borrower or a small borrower, everybody has the tendency to take the issue of repayment of debt lightly. Their only concern is about the consequences if they lost their credit rating with CIBIL (Credit Information Bureau India Limited).

Two decades ago, the Debt Recovery Tribunal and the SARFASI Act were introduced to speed up the recovery process. Both have not helped. When the bank goes to the judicial system for recovery of loan, it takes over 10 to 15 years to complete the process.

Since NPAs have a greater impact on the common man, by way of increase in service charges, reduction in deposit rate, etc., the Government and the Reserve Bank of India should own the responsibility and speed up the process of recovery.