Sheroes Hangout Cafe In Agra, close to India's own wonder of the world, the Taj Mahal, a... 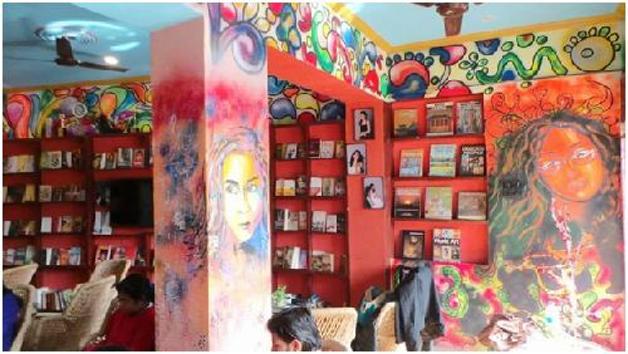 In Agra, close to India's own wonder of the world, the Taj Mahal, a nondescript café 'Sheroes Hangout' welcomes tourists into its cramped interiors. Neetu Mahour (23) sits behind the counter, keeping a close watch on the proceedings. She has for company her mother Geeta (42), who works in the café's kitchen on the first floor. Ritu Saini, the nineteen-year-old floor manager, hovers nearby, ready to seat any incoming patrons and take orders. Ritu also handles the accounts and what meagre earnings the café brings in.

The café itself sports an unhurried nonchalance, its ambience peppered by bamboo furniture as Bollywood jingles waft through the frugal setup. Graffiti in indigo and green, portraying a dreamy-eyed woman, completes the visual collage. Curiously, in one corner, a large pin board is decked up with mobiles, makeup and chowmein. A mini boutique hosts clothes designed by twenty-two-year-old Rupa, who hails from Muzaffarnagar.

As patrons come in, the women get busy. For, this is no ordinary café. It is the Sheroes Café run by Alok Dixit, the founder of the Delhi-based non-profit organisation Stop Acid Attacks (SAA). All the women working in the café are victims of heinous acid attacks by lovers, family, or relatives. Founded in 2013, SAA itself was inspired by a beauty parlour in Pakistan run by acid attack survivors.

Acid attacks differ from the other equally barbaric types of crime in one fundamental way. They distort the most visible and recognizable part of the victim's identity—her face. A person's face is easily his or her most loved and most obsessed over physical feature.

When an acid attack disfigures this most loved feature, the victim loses her sense of self. She breaks within. What does she go back to when she sees herself in the mirror at the end of the day? A rude reflection that has become a cruel joke played on her by some pervert. This joke gets played over again and again when people gawk at her, comment on her disfigured face, undermine her being. The victim then tends to go into a shell and withdraw, both literally and psychologically, from society. 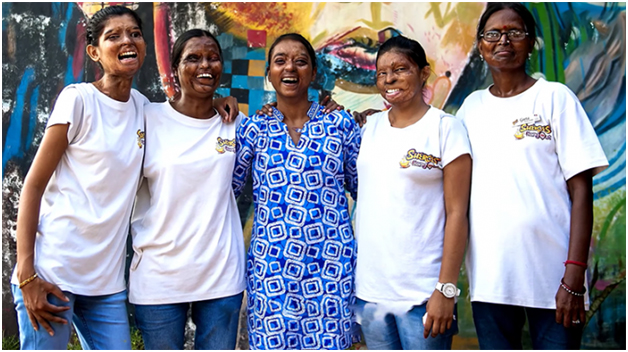 t is to bring about an attitudinal change in the victims, and change the way society looks at them that Sheroes Café was conceptualised by Dixit. Says Dixit, "We show them that nothing is wrong with them." The trick has worked. The questions in their minds have shifted from "why" to "why not". Says Ritu, who was attacked by her cousin for rejecting his romantic advances and lost her left eye after undergoing ten reconstructive surgeries, "Before Sheroes, I used to cover my face. I wanted to know why he did this to me. Now, I am busy. I am forgetting. I don't care to know why he did it." On the contrary, Ritu, a former state-level volleyball player, has mustered enough courage to ask herself why not be visible in public and walk with her head held high.

The Story of Rupa

Before Sheroes, Rupa had been the target of a broken marriage and an acid attack by her stepmother. She wanted to be a school teacher but was rejected since parents were concerned that she might spook their children. Once she joined the SAA-backed café, there has been no looking back. Gushes Rupa, "This place is my family and support now. I don't miss home. Here, we have the opportunity to fulfil our aspirations." Excellent at stitching, she dreams of becoming a fashion designer. Neetu and Geeta too affirm that the café is a harbinger of hope for them, a second chance at life.

Sheroes is a Rehabilitation Project

But to earn a livelihood, the café needs to be competitive and make profits. After all, helping acid attack victims stand on their own is one of the objectives of SAA. Dixit disagrees, saying that they need not compete with bigger cafes or coffee chains for business. The SAA founder emphasises, "Competition is among equals and Sheroes is not a business project. It is more a means to rehabilitate these survivors."

Still, the café has been a resounding success in its own right. It attracted more than 5000 customers in its first six months alone, reflecting a changing mindset of the society not only towards acid attack victims but also towards the crime itself. Reforms in 2013 to IPC sections related to such attacks made them a separate offence punishable with terms up to ten years in prison. More than 300 cases of acid attack were reported in 2014. The state government of Uttar Pradesh has promised to extend help in locating land for a bigger and better café.

Sheroes has attracted international attention as well, with foreign tourists taking back their experience with them and sharing with like-minded Samaritans. SAA now plans to open similar cafes in Kanpur, Ludhiana, and Meerut. Almost synonymous with an awakening to the plight of acid attack victims, the movement birthed by SAA is spreading.

Acid attack victims in India might have lost one face forever. But they have found another in SAA and Sheroes.