Generic medicines are the unbranded bio-equivalent form of drug which is commensurate with branded ... 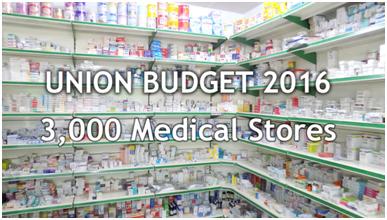 Generic medicines are the unbranded bio-equivalent form of drug which is commensurate with branded drugs in terms of their therapeutic value. They are those medicines that are available after the expiry of the patent protection granted to the original researcher of the drug.

Although they are an equivalent substitute to their branded counterparts in all aspects, generic drugs are typically found substantially cheaper than the latter. It is estimated that one could save two-thirds of the cost of the branded drug if one opted for generic drug.

Despite its undeniable potential to reduce the cost of healthcare exponentially, most of the people in India are ignorant about its availability as an option. Some people even suspect the genuineness in the quality of generic medicine because it is inexpensive. Thus, people end up buying branded drugs without realising that they could obtain the same type of medicine for a lower price.

The Influence of Satyamev Jayete

Generic medicine first caught the attention of the general public of India when this subject was covered in Aamir Khan's TV programme, 'Satyamev Jayate' (Truth Triumphs), aired on 27th May 2012. The episode created large scale awareness about generic medicines among the common people. The manipulative methods of the medical mafia were also revealed to the people. This created a questionable impression about the reputation of Indian doctors in general. A cluster of 21 medical institutions, including the Indian Medical Association (IMA) demanded an unconditional apology from Aamir Khan for 'defamation' of the Indian doctors. 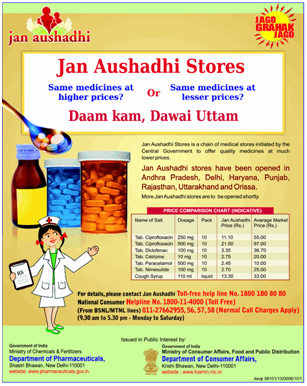 Jan Aushadhi programme was launched by the Government of India in the year 2008, to provide safe and effective generic drugs at affordable prices. However, Jan Aushadhi has so far met with little success.

As of May 2016, there are 261 stores operational in India, predominantly in the northern parts of the country. A total of 615 different generic medicines have been identified. More details can be obtained from the official website: http://janaushadhi.gov.in/

An announcement was made by the Government of India a day after the Union Budget 2016 that it planned to open 3,000 Jan Aushadhi stores throughout the country during 2016-2017. Many experts including doctors are sceptical about this model, claiming that the government needed to build trust among the people about generic medicines. Besides, there is still no tested mechanism in place to ensure these medicines are time- and laboratory tested.

In countries like USA and UK, 70% of the doctor's prescriptions are for generic medicine. This is due to an active governing body, the Food and Drug Administration (FDA) in place in the country to regulate the safety of the medicines.

In India, despite a directive from the Medical Council of India (MCI) to prescribe generic drugs, doctors are reluctant to prescribe generic medicines, claiming they were not as effective as their branded equivalents. 98% of doctors' prescriptions are for branded medicines and the people are forced to buy the brand suggested by the doctor. This escalates the overall healthcare cost of the country.

Generic medicines have a long way to go before catching up in India but there is an alternative available for buying medicines at competitive prices. Since branding is a subjective term and every company has a different way of branding their medicines, there is a big difference in the pricing among the brands.

Thanks to the power of the internet, there are many websites which provide the generic medicinal equivalent to the prescribed branded medicine. They also list out all the branded medicines available in the market. One such project which is currently the most reputable one is an initiative by the late Dr M.M. Mittal (http://www.medguideindia.com). People can search for the brand of medicine that is priced to suit their budget and their availability, and buy these drugs from wholesalers or large pharmacy shops where the chances of obtaining these specific medicines are better. There are now many pharmacies available online, offering wider choices in the brands and generic to help the people to choose from.

With input from Vivek Hari Narayanan