In the June 2016 issue of your ezine Presense, we had congratulated the scientists of Indian Space ... 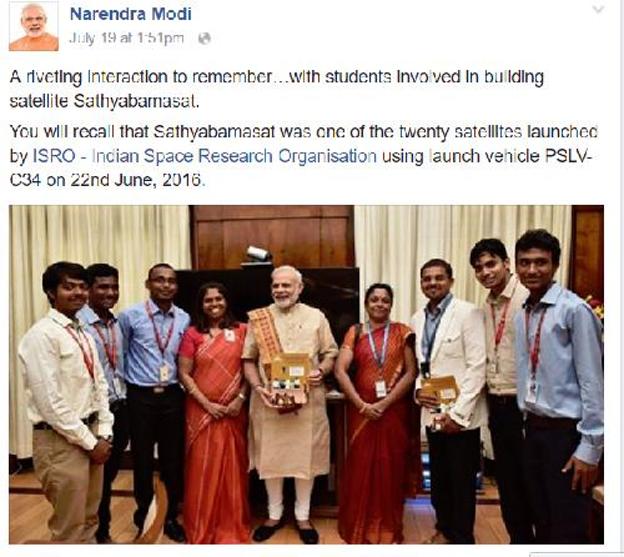 In the June 2016 issue of your ezine Presense, we had congratulated the scientists of Indian Space Research Organisation (ISRO) for launching 20 satellites on 22nd June 2016, using the launch vehicle PSLV 34. Sathyabamasat was one of the Satellites, made by the students of Chennai-based Sathyabama University. Immediately after the launch, the then Minister of HRD Smt Smriti Irani called Dr Maria Zeena Johnson, Director of the University and congratulated her on behalf of the Prime Minister and herself. In the same week, Prime Minister Shri Narendra Modi also congratulated the students through his 'Man Ki Baat' radio talk.

This is the first time in India that a satellite made by the students with payload is included by ISRO in the launch vehicle. This satellite weighing around 1.6 Kg has been put into the orbit and has now started sending signals successfully to the ground station situated within the University campus. The life time of the satellite is 6 months and thereafter, it can be used for amateur radio communication. A team of 21 persons, including students and faculty members was involved in building this satellite.

The Management and the students were pleasantly surprised when they received a call from the Prime Minister's Office, inviting some students to meet the Prime Minister. An eight-member team, including Dr Maria Zeena (Director), Dr Sheela Rani (Vice-Chancellor and Project Head) and students met the Prime Minister at the Parliament House on 19th July 2016 and spent about 15 minutes with him, sharing their experience.

"We were doubtful whether PM would have the time to meet us due to the Parliament session. We were called inside PM's chamber exactly at 11.30 am at the scheduled time. Shri Narendra Modi got up from his chair and welcomed each one of us by shaking hands with us. We were eight. Only five chairs were available there. Till all of us got the chairs, he was also standing and talking with us", recalls Dr Sheela Rani.

The Prime Minister had the full details of the project on his table, even before the team entered. He spent the entire 15 minutes of the meeting, listening to them attentively about the project and about the support the students needed for such projects in future. He wanted to know about the specific hurdles and challenges they faced in the course of the project.

There was a gentle alert by the PMO staff at the 15th minute. When the team members rose to exit, one of the students requested the autograph of the Prime Minister on the brochure he had on his hand. When Shri Modi autographed on one brochure, the other students too wanted his signature on their brochures. Prime Minister noticed that his staff was reminding them that the time was up. He turned to his staff and said, "They are scientists. Please wait". After completing his signatures for all the students, he stood up and shook hands and wished them many more such success stories. PM immediately tweeted about this meeting with photos in his social media.

"We were so excited and we could not believe that the Prime Minister can be so simple and down to earth. He is a great listener and he listened to every word we spoke and prompted us to say more when he wanted clarity", said Dr Maria Zeena Johnson.