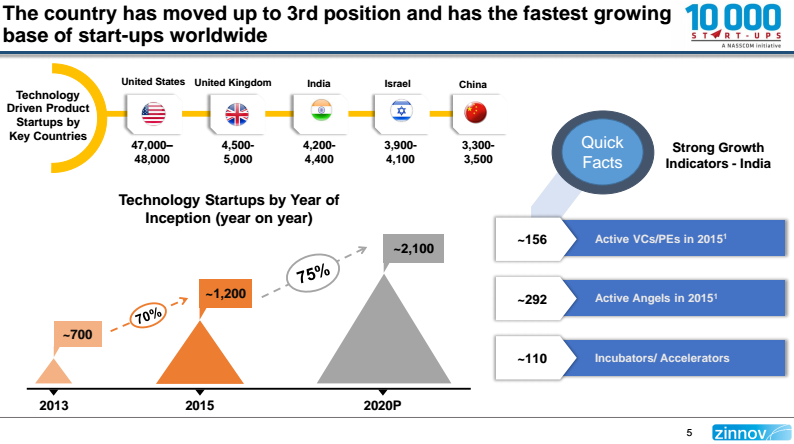 Dr Abdul Kalam, late former President of India, nurtured a fond dream that consisted of his two desires for India. He shared those desires whenever he interacted with students. These were (1) 'one million' entrepreneurs to be created to generate a 'hundred million' job opportunities. (2) In the same breadth, he also expressed his concern that the Innovation Index of India was ranked far below 50. He wanted India to be in the top 10. (As per 2016 Global Innovation Index, India's rank is 66 out of 128).

Emergence of the Start-up Culture

After 2010, the Start-up culture entered India with many investors showing interest in tech start-ups. According to the latest study, India ranks third with around 4200 initiatives in India for Tech Start-up, standing next to US (47,000) and UK (4500).

The announcement by the Indian Prime Minister Narendra Modi from the Red Fort of Delhi during his Independence Day (August 2015) address about the Start-up India Scheme, and its subsequent formal launch in January 2016 has made a powerful impact on the potential entrepreneurs in India. Modi's Start-up India and Stand-up India Scheme coupled with Make-in-India, Digital India, and Skill India Schemes are aimed at creating more entrepreneurs and job opportunities.

The tertiary education (college) system in India has always prioritised preparing the students for employment and not entrepreneurship. "Nowadays, youngsters want to be on their own. They have the potential for entrepreneurial skills. Technology has already changed the way of business. I feel technology can generate more entrepreneurs. They need to learn the expertise to package their products and services to suit the demands of the customers. The awareness should be brought about from the Higher Secondary School level itself", said K T Jagannathan, Associate Editor, The Hindu.

While launching the Start-up India Scheme on 16th January 2016 at Vigyan Bhavan, Narendra Modi said "Start-up India is a revolutionary scheme that has been started to help the people who wish to start their own business. These people have ideas and capability, so the government will give them support to make sure they can implement their ideas and grow. Success of this scheme will eventually make India, a better economy and a strong nation".

The purpose of the Scheme is to support potential entrepreneurs. The Government of India provides tax exemptions, if the Start-up entities with 'innovation' component, register through their site www.startupindia.gov.in.

The Government of India has also advised 1,25,000 bank branches to provide financial assistance to a minimum of two greenfield enterprises viz. (1) SC/ST entrepreneur and (2) women entrepreneur. By the end of March 2017, the banking industry is likely to create 2.50 lakh (250,000) new entrepreneurs with financial assistance ranging from Rupees 10 lakhs (1,000,000) to 1 crore (10,000,000) each. Since these loans are guaranteed by the National Credit Guarantee Corporation, the banks provide finance without collateral security. In some cases, subsidy is also provided.

It is also understood that every week on Wednesday, one senior government official follows up on the progress of the scheme through Video Conferencing with the Managing Directors of the banks.

Earlier till October 2015, too much of hype was created over these Tech Start-ups. "These start-ups were valued, not based on sound business or financial fundamentals. It was like a bubble. These Start-up companies focussed on valuation and not on values. We do not need start-ups which will implode in 4 years", said Deepa Seshadri, Chartered Accountant and Management Consultant.

Since the launch of the Start-up India Stand-up India Scheme in January 2016, the Start-up ecosystem is getting stabilised. It is estimated that by 2020, India will have 12,000 Tech Start-ups.

The study, conducted by Assocham recommended that aligning 'Start-up India' with 'Make in India' and 'Digital India' campaigns had the potential to expand the domestic ecosystem for new entrepreneurs.

According to Shyam Sekar, Chief Mentor and Founder of Startup Xperts, a business strategy consulting company for start-ups, any Start-up should pass through the following stages to become stable. Broadly, this concept applies to all new greenfield enterprises.

Salin Amanda Louis, Co-Founder of Persona, a Horizontal Leadership Strategy consulting firm, said that three things were important for the sustainability of any business, irrespective of its being a start up or an MNC. They are business strategy, branding strategy, and marketing and communication strategy.