Demonetisation – You Moved My Cheese!

When one reflects on the impact of the current Demonetisation move in India, one is reminded of a...

When one reflects on the impact of the current Demonetisation move in India, one is reminded of a book titled "Who Moved My Cheese", written by Spencer Johnson in 1998. It is a story about four characters – Scurry and Sniff, Hem and Haw. They were all living their own happy lives because they had a huge reserve of the food they needed viz. the cheese, abundantly available nearby. But what they did not notice was the gradual depletion in the quantity of the cheese so that one day it was no longer available for them.

Scurry and Sniff seemed to have sensed the inevitable before it happened. They were prepared for the crisis, and immediately moved on to another place for alternative sources of cheese. Hem and Haw however, were unprepared. They felt devastated and victimised. They suspected the crisis to be some fraud or foul play. They refused to explore alternatives, insisting that the unfair situation be changed. In the meantime, they remained hungry with no cheese to feed on. "Who Moved My Cheese" is a book about change and how one deals with it.

At 8 pm on November 8th 2016, the Prime Minister of India, Shri Narendra Modi announced the devaluation of Rs.1000 and Rs.500 currency notes with effect from midnight of the same day. He also appealed to the fellow citizens for their support in this implementation as it was directed to quash black money and fake money that was rampant in the country. Banks remained closed the following two days, and the day after onwards marked a flurry of activity for exchange of old for new notes at banks, market places, homes and public places. Where 86% of the currency value in circulation was withdrawn in a country where 98% was transacted in cash, this scenario made a horror story, especially for the citizens who were caught off-guard by the move.

The opposition political parties howled foul play by the government, accusing the government of insensitivity towards the common people's hardship. There was demand for reversing the decision. There was enough criticism to counter any positive scorecards for the move. Even as this edition is ready for release, the commotion continues. And in the meantime, the government justifies the suddenness and secrecy of the move as the only way to catch the culprits (read hoarders and fake money mongers) – by surprise.

A point for reflection is - did we miss the telltale sign of what was in store for the country on that fateful day in November 2016? One would suspect so.

As far back as on 15th August 2014, the Prime Minister announced a financial scheme called Pradhan Mantri Jan Dhan Yojana (PMJDY). The objective of PMJDY was the financial inclusion of every citizen of India who did not have a bank account. 'A bank account for each household' was the declared motto and national priority. PMJDY allows the opening of a bank account with zero balance, it provides accident insurance; it provides the RuPay debit card which can be used for transactions; it provides loan benefits; and it provides mobile phone banking facilities. PMJDY was essentially aimed at motivating the poor, the marginalised and the rural dwellers to move from traditional cash based transactions to a cashless one, and be included in the country's mainline banking economy.

The intention of this editorial is neither to defend the government's move for demonetisation nor to evaluate it. That is another matter. The intention is to ask, "now that it has happened and there is obviously no going back, what next?" Do we dwell on the tragedy of the hardships of demonetisation like Hem and Haw, or do we look to change for positive alternatives, like Scurry and Sniff did? 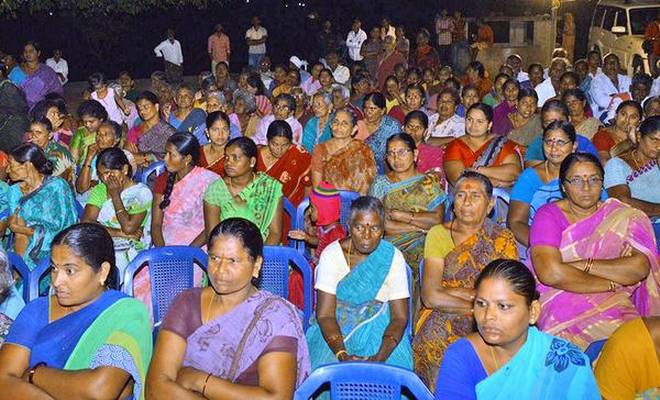 The answer to this can be inferred from the experience of the families of a sleepy village in Kakuturivaripalem, Prakasam District in the South Indian state of Andhra Pradesh. Its 2209 residents, who were once strangers to banking, now deal cashless. They now operate bank accounts, use RuPay cards and mobile phones to transact and make payments to milk suppliers and stores which are equipped with electronic Point of Sale machines. This road to a cashless lifestyle began with their local bank's drive for PMJDY. (See the picture - Photo courtesy: The Hindu)

The villagers also supported each other by guiding and encouraging electronic banking among the fresh users in their village. Therefore, unlike other parts of the same district, and the country, there were no queues for cash in this village after demonetisation was declared. When cash crunch threatened to hamper the sowing of crops, the villagers got together and helped in the transfer of funds to the accounts of suppliers of farming needs such as fertilisers and pesticides, to ensure uninterrupted supply for the farmers.

In a country where urbanites and literates, politicians and economists cried foul about the 'cheese' that disappeared, the villages of Kakuturivaripalem got together, recognised their potential, leveraged on the opportunity, and moved forward in a smooth migration to a cashless lifestyle. May be, the rest of the country needs to take a break from the debates and rallies and take a cue from these wise villagers on how to move on, without crying "Who Moved My Cheese!"