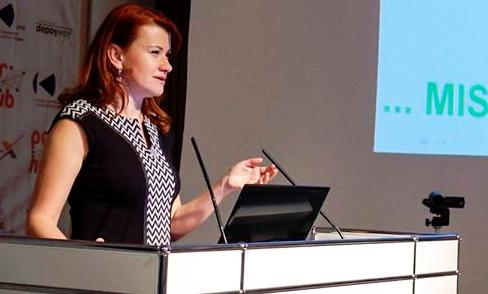 The details of the Award are available in their site http://www.c4fdavosaward.com/. For more details, please contact Sukruti Narayanan, Manager C4F Awards over c4f@forumdavos.com. Early bird concessions are available who submit the nominations before 15th December 2016.

Yanina Dubeykovskaya, the Founder of Davos based World Communication Forum (WCF) is a multifaceted personality. She is a political communication strategist, communication professional, author and a champion of Tai Chi, a Chinese Marshal Art.

In an exclusive interview with Prime Point Srinivasan, Editor in Chief, PreSense, through email, Yanina says that the role of communication professionals has changed drastically over a decade due to technology revolution. She has also shared interesting insights about the C4F Awards. Excerpts:

This is the 7th edition of the Award. What prompted you to initiate such Award scheme in the beginning. Any specific instance or expereince?

The award appeared in 2011, at the second edition of the WCF Forum in Davos. For 5 years, it has evolved into a global platform for development of online communities, uniting people who come to the Forum and identifying the true trend-makers among them. C4F still secures valuable publicity for the leaders of our community. That is, the award was developed as a gated event and applications were submitted only by the members of the WCF family. Much later, in 2015, we decided to open the application publicly and introduced the C4F section with corporate categories. Until then, we have evolved following the Nobel Prize model. The fact is that by 2015, our global professional community had summoned representatives of 58 countries worldwide, with all of whom we had simultaneously been actively developing the regional sessions of the Forum. That was exactly the time when we were ready to provide our global platform expertise even for those who could not attend the Forum in Switzerland, yet who, nevertheless, were renowned for thinking globally and acting according to the highest standards of the communication profession.

What are the areas of recognition?

The areas of Recognition include Personal and Corporate Awards.

Can you kindly share more details about the Awards

We have given over 35 awards in the past 7 years out of which 28 personal awards and 7 corporate awards. We have had participants from over 58 countries worldwide.We have involved 48 media partners, 23 Government bodies, 124 partners, 22 educational institutions, 180+ consultancies, 65 panel discussions, 31 keynotes, 298 speakers.

Is there any change in the communication pattern among the corporates and communication professionals over a period of ten years, due to technology revolution.

Yes, a lot of revolutionary changes have taken place over the last 10 years. We have passed all the way, staring from the fascination with the Digital and the belief that Digital Revolution will change both the corporate and individual behavior and drive them towards a more ethical level, that the world will become more transparent and fair.

Now we can already see that in many respects the humanistic potential of the Digital has become quite manipulative. But at the same time we witnessed a much bigger rise of trust, reputation and sincerity. Meanwhile, the work of professionals in the field of communications has changed drastically and has acquired a much more creative touch and greater level of strategy and vision.

What is the difference between the types of communication pattern between the developing countries and developed countries, with specific reference to India, as a developing nation.

I personally do not consider it correct to make such a division. Each country has its own specifics, including its professional expertise. It is also the very policy of the Forum as an event and as a community to try and give a more diversified, multi-cultural perspective of today's communication industry. We do not follow the usual Anglo-Saxon model of the lecturers viewed as teachers or tutors and the rest of the audience viewed as students.

Our policy in every single discussion is to give the floor to experts who are representatives of different regions and continents. I point this out – not just different countries, but different regions and continents. We believe in diversity as a huge potential for development. we are very pleased to welcome to the annual WCF forum key speakers and participants who join us with a huge delegation from India and the BRICS region.

I think that our peak-time as professional has come, that all of us who work in the field of communications are now responsible for the most strategic challenges of mankind. We have to offer to the world a win-win strategy for the successful resolution of conflicts, to shape the global communication agenda more relevantly and make it pertinent to the vital interests of humanity, to erase the focus on war and contradiction, and to help people feel their inner integrity and unity, instead of their differences, limits, or boundaries. This particular type of communication and the future of the coming generations will be our "cherished reward".

We can perceive that India, with its culturally deep-rooted, philosophical inner potential for goodness and wisdom can be today's very challenger for many processes of drastic changes of our mankind.