Bridge Over the Troubled Waters of Cauvery

History tells us of many a battle fought over man's claim over land. The day has finally... 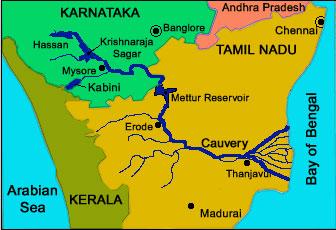 The recent riots in the southern states of Karnataka and Tamil Nadu over the Cauvery River dispute are proof of this. The only outcome of the riots is loss of lives and property, and no solution. The trigger for the violence was the dispute over the sharing of the waters of the River Cauvery between two southern states through which the river flows.

Water is a natural resource and like other natural resources, is getting scarcer by the day, due to adversely changing climatic and environmental conditions. Many river basins are therefore getting depleted of its surplus water. Even then, scarcity is a relative phenomenon. While there might be sufficient water in the world to satisfy the needs of life, its regional and seasonal distribution is uneven, leading to scarcity in certain regions and during certain seasons. Unabashed population growth adds to this demand crisis.

The upper-riparian State of Karnataka is in a position to call most of the shots, irrespective of court orders and central government directives. Karnataka has claimed that it is unable to release water to its neighbouring state when it is reeling under drinking water scarcity. Tamil Nadu meanwhile, appeals for its farmers who are affected by water scarcity caused by insufficient rains and river water for their livelihood – their crops. Selfish political influences in the decision of public policies have aggravated the public water distribution crisis, remaining unresolved by negotiations and court directives.

Dr A.P.J.Abdul Kalam, during his tenure as President of India, spoke of a National Smart Waterways Grid to harness water from surplus river basins to feed water deficient river basins. As far back as the late 1970s, Dinshaw Dastur, a senior consultant engineer had proposed a plan called the Garland Canal Scheme. It envisaged the construction of two mammoth canals, one along the foothills of the Himalayas to catch the snowmelts, and the other around the southern and central plateau of the country, and connecting the two canals by a series of pipelines. This ambitious project has remained in the backburner since then, for want of political resolve, and probably due to its high project cost too.

The Damodar Valley Corporation (DVC) was commissioned in 1948 as an autonomous body, and controlled and managed the flood-prone Damodar Valley that affected the states of West Bengal and Bihar (now Jharkhand). Under its independent and professional management, DVC has been successful managing the equitable distribution of the river water to the states. Mr B.S. Raghavan, IAS as a former Chief Executive of DVC, vouched for the independence and effectiveness of DVC in taking care of the interests of the two states. A similar autonomous body entrusted with the task of the Cauvery River Basin Management is a solution Mr Raghavan recommends, based on his experience with DVC.

Israel showcased itself in a recent exhibition called "Open A Door To Israel" in the city of Bengaluru. It displayed the country's technological advancement in micro drip irrigation, which claims to reduce the use of water for irrigation by 50 per cent. Israel, once known for its arid terrain, has made a tremendous turnaround. It now claims to be a water surplus country. This has been achieved largely due to its rapid strides in technologies like drip irrigation, waste water recycling and desalination. The same techniques have also been adopted by drought hit countries like Paraguay and parts of the United States like California.

The final call for a permanent solution to the Cauvery Water dispute lies with the political will to resolve – either by nationalisation of the rivers and waterways for equitable distribution of water to all the states, or by institution of an independent body, similar to DVC to control and manage the Cauvery for fair and equitable distribution to the southern states that depend on it for its lifeline of agriculture and drinking water needs, or else adopt technologically advanced steps as drip irrigation, waste water recycling or desalination.

Mutual discussions and negotiations between the affected states for a solution having failed, this is no longer an option.