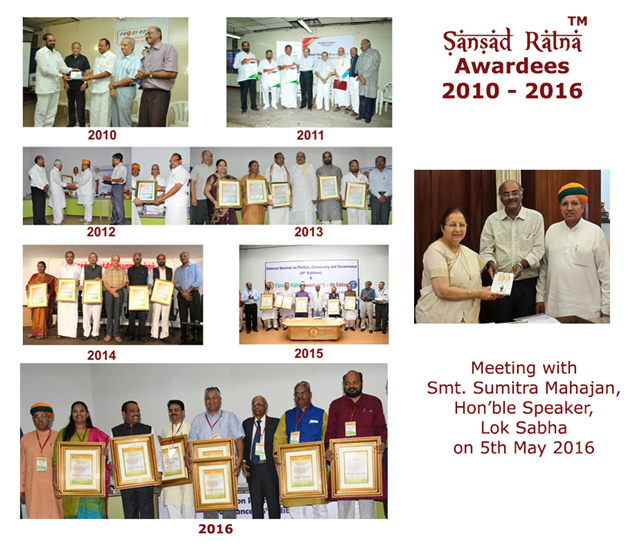 By the end of the 14th Lok Sabha, there was severe criticism about the functioning of the Lok Sabha. Even the then Speaker Shri Somnath Chatterjee during the closing speech for the 14th Lok Sabha, was expressly emotional and registered his unhappiness over the frequent disruption of the Parliament. The entire nation was criticising the behaviour of the Parliamentarians. Whenever a mock Parliament session was held in colleges and schools, the students started the sessions by throwing chairs and making noise. Meanwhile, elections for the 15th Lok Sabha were announced. 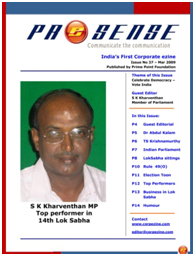 Prime Point Foundation and the Editorial Team of the eMagazine PreSense decided to come out with a positive aspect of democracy and recognise the top parliamentarians, who discharged their constitutional duties quietly. Around the same time, our Ezine PreSense (published by the Foundation) covered the theme, 'Celebrate Democracy' in its March 2009 edition. While the media and the nation at large were criticising the Parliamentarians, we thought differently. We identified the top performers of the 14th Lok Sabha from the data released by the recognised PRS Legislative Research (PRS India) and featured them with our interviews with them. Shri Kharvendhan, one of the top performers guest edited the Ezine then. Shri Anand Rao Adsul secured the first position in the Questions category and in the Overall Performance tally for the 14th Lok Sabha. Interestingly, we interviewed him at the midnight hour as he was busy preparing for his campaign then. We carried his interview in audio and text formats in the ezine.

This idea was conceptualised based on the suggestion given by Dr Abdul Kalam to 'celebrate success'. We modified this to 'Celebrate Democracy' to honour achievers in the Parliamentary system. Dr Kalam appreciated our initiative and readily gave a telephonic interview for our ezine. We published his interview both in audio and text format. This marked the beginning of the honouring of outstanding Parliamentarians by a civil society.

After completion of the first year of the 15th Lok Sabha, we decided to honour its top performers on total tally in the parameters (a) Questions (b) Debates (c) Private Members Bills. Coinciding with the 50th edition of ezine PreSense, we addressed the top performers as 'UnSung Heroes'. Three MPs viz. Shri Ananda Rao Adsul, Shri Hansraj and Shri Ramasubbu were personally honoured at the Thakkar Bapa Vidyalaya, Chennai on 1st May 2010 in the presence of eminent citizens of Chennai. Shri Adsul could not participate due to previously committed official engagements. Former Chief Election Commissioners of India, Shri T S Krishnamurthy and Shri N Gopalaswamy honoured them. Dr. Abdul Kalam gave a speech live through phone from Delhi. The news was carried nationwide by the media. We decided to honour the top performers every year, based on their performance till the end of the first part of Budget Session We selected the performers based on the data supplied by PRS India. In April 2011, we held the Awards function at the Thakkar Bapa Vidyalaya, Chennai.

In 2012 (the third year), the Indian Institute of Technology, Madras supported us. We had been honouring the top performers under the three categories viz. Questions, Debates, Private Members Bills. Shri Gopalakrishna Gandhi (Grandson of Mahatma Gandhi) presented the Awards. Dr Abdul Kalam greeted the Award winners through a video message. It was a day long programme with a panel discussion on 'Democracy' with senior leaders of political parties sharing their views. That year, we renamed the Awards 'Sansad Ratna Awards'.

In 2014, after the end of the 15th Lok Sabha, we decided to honour all the top performing MPs with a total score of more than 1000 under the above three categories and top 3 women MPs. Five MPs received Awards in person. The Award function was held in February 2014 at the Chennai Press Club in the presence of media professionals. The event attracted good media coverage.

To motivate many more MPs to actively participate in the proceedings of the Parliament, we decided to honour the MPs who consistently scored the top position in (a) Questions (b) Debates and (c) Private Members in the entire 15th Lok Sabha. They were awarded the 'Sansad Maha Ratna' Awards'.

Accordingly Shri Anandrao Adsul, Shri Hansraj G Ahir and Shri Arjun Ram Meghwal, who secured the No 1 position in the Questions, Private Bills and Debates categories respectively in the 15th Lok Sabha, were made 'Committee of Judges'. We requested Shri Anand Rao Adsul-ji, 5th time MP, to chair the Committee and guide us. These three Parliamentarians were honoured with the 'Sansad Maha Ratna' Award at IIT Madras in June 2015 in the presence of many eminent persons of the Chennai City.

They were nominated by the Judges of the Selection Committee, based on their individual cumulative performance upto the Budget Session 2016. Additional parameters like attendance in the House and Committee Meetings, Usage of MPLad funds, ranking within the top 10 were also taken into account

From 2016, we will be honouring one Rajya Sabha Member, retired in the previous year after completing full term of six years, based on the total tally.

Every year, the selection of the award winners is being done based on the data provided by Lok Sabha Secretariat and PRS India. Only the data relating to initiated debates (original matters) will be considered for the purpose of Award.

Dr Abdul Kalam had guided the Sansad Ratna Team in conceptualising the theme. He had addressed the first Awards function in May 2010 over phone, live from Delhi. He had also devoted a full chapter on the Sansad Ratna Awards in his last book, 'A Manifesto for Change', authored by him jointly with Shri V Ponraj.