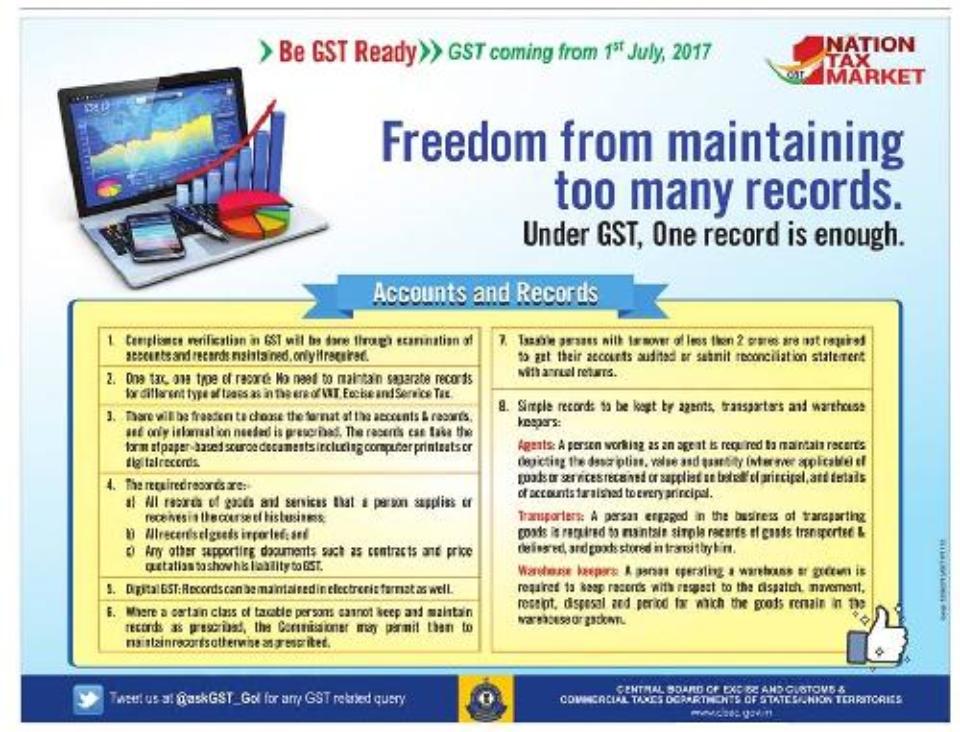 Share Post
The Modi Government is burning the midnight oil to ensure the all-comprehensive single uniform tax – Goods & Services Tax (GST), is implemented by July 1st 2017, for which it has convened a special session of Parliament in the midnight of June 30th to roll out the historic legislation in the presence of the opposition. The Modi government had endorsed GST when the package of four legislations were adopted by Lok Sabha and returned by Rajya Sabha (Rajya Sabha cannot adopt money bills; it can only return).
The new tax seeks to usher in a uniform indirect tax regime in the country. It will not lead to inflation as apprehended by some sections, the Finance Minister Arun Jaitley has stated. Successive governments have contributed towards the formulation of GST, and no one person can take credit for it. The bills were cleared by the Rajya Sabha after negation of a host of amendments moved by the opposition parties. The main opposition, the Congress did not move any amendment. The Lok Sabha had passed these bills on March 29th of this year. Towards the third week of May, the Government gave the final approval to its rules and rates. In order to implement GST, the Parliament cleared the Central GST Bill, 2017; The Integrated GST Bill, 2017; The GST (Compensation to States) Bill, 2017; and The Union Territory GST Bill, 2017.
Goods & Services Tax (GST)
GST seeks to replace all taxes earlier levied by the Central and State governments. GST is implemented through the Constitution (One Hundred and First Amendment) Act 2016, following the passage 122nd Amendment Bill of the Constitution. GST is governed by the GST Council and its Chairman is the Union Finance Minister. Under GST, goods and services will be taxed at the following rates: 0.25%, 5%, 12%, 18%, 28%. There is a special rate of 0.25% on rough precious and semi-precious stones and 3% on gold.
If we delve into its history, we will learn that in 1986, the then Prime Minister Vishwanath Pratap Singh introduced the Modified Value Added Tax (MODVAT). Goods and Services Tax (GST) will subsume various indirect taxes including Central Excise Duty, Services Tax, Additional Customs Duty, Surcharges, State-level Value Added Tax and Octroi. Other levies which are currently applicable on inter-state transportation of goods are also likely to be done away with in the GST regime.
The following taxes will be bound together by GST: Central Excise Duty, Commercial Tax, Value Added Tax (VAT), Food Tax, Central Sales Tax (CST), Octroi, Entertainment Tax, Entry Tax, Purchase Tax, Luxury Tax and Advertisement Tax. There will be no GST on the sale and purchase of securities. That will continue to be governed by Securities Transaction Tax (STT).
GST will be levied on all transactions such as sale, transfer, purchase, barter, lease, or import of goods and/or services. India will adopt a dual GST model, which means that taxation will be administered by both the Union and State Governments. Transactions made within a single state will be levied with Central GST (CGST) by the Central Government and State GST (SGST) by the government of that state. For inter-state transactions and imported goods or services, an Integrated GST (IGST) will levied by the Central Government. GST is a consumption-based tax; therefore, taxes will be paid to the state where the goods or services are consumed and not the state where they are produced. IGST complicates tax collection for State Governments by disabling them from collecting tax due to them directly from the Central Government. Under the previous system, a state would have had to deal only with a single government to its collect tax revenue.
It is proposed to insulate the revenues of the states from the impact of GST. Besides, it will take some more time to include petroleum products under GST since sales tax and other local levies are different in different states. The Centre is trying to hammer out a formula on how to share revenues and compensate states, with the free market determining prices on a daily basis. The Central Government has assured the states of compensation for any revenue loss incurred by them from the date of implementation of GST upto a period of five years. A major effect of the GST roll-out is the daily changes in fuel prices in India.
A 21-member select committee was formed to look into the proposed GST law. State and Union Territory GST laws were passed by all the states and Union Territories of India except Jammu & Kashmir, paving the way for smooth roll-out of the tax from July 1st 2017.
In a parallel development, a 'Goods and Services Tax' Network (GSTN), a non-profit organisation, has been formed to create a platform for all the parties concerned viz. stakeholders, the government and taxpayers to collaborate on a single portal. The portal will be accessible to the central government, which will be able to track every transaction on its end while the taxpayers will have a vast service to return/file their taxes and maintain records. The Information Technology (IT) network will be developed by private firms, which will tie up with the Central Government and will take its share of stakes accordingly. The known authorised capital of GSTN is ₹10 crore (US$1.6 million) in which the Central Government holds 24.5% of shares while the state government holds 24.5% and the rest by private banking firms.
Under the GST Act, GST has to be implemented latest by September 1st 2017 with a grace period upto September 12th, 2017. Thereafter, all previous taxes will cease to exist. This is the reason that the Government is intent on rolling out GST by July 1st 2017 to subsume all indirect taxes and replace it with a single uniform tax.
By T.N. Ashok, Editorial Advisor
Tags
GST
Follow