Electoral Voting Machines (EVMs) have been the subject of intense discussion and dispute after the recent State elections when a major part of the electoral votes went in favour of BJP, giving it a thumping majority in the State Assembly.. This article discusses in detail the importance of EVMs. 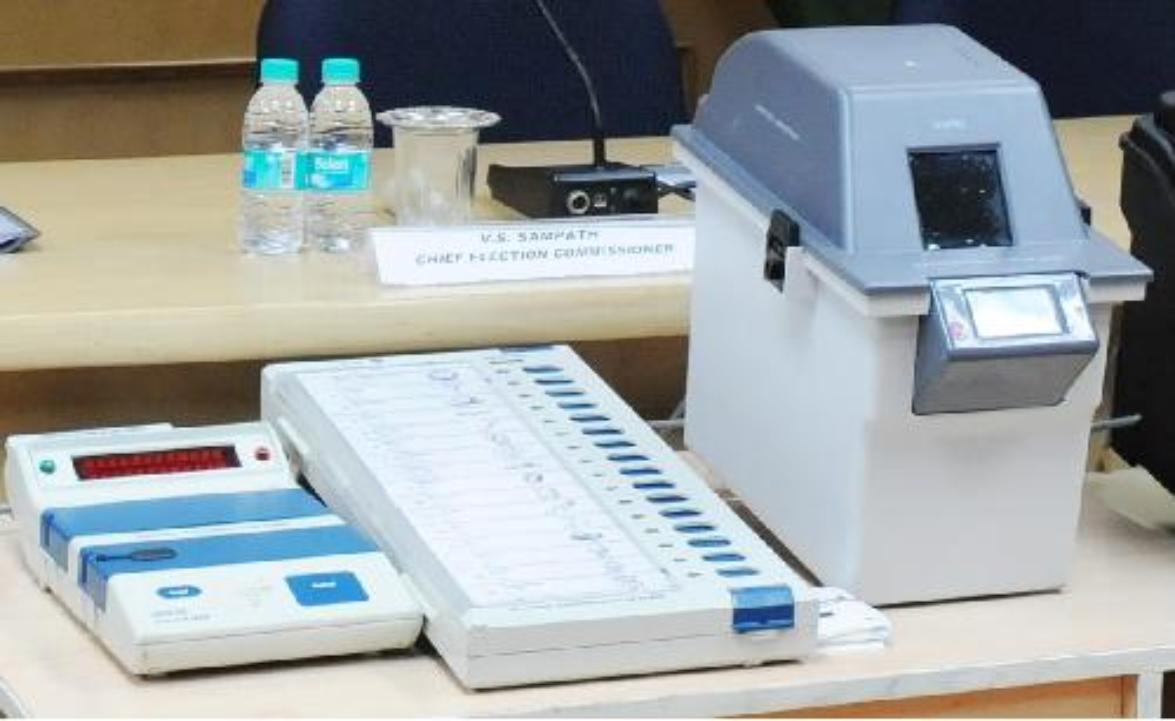 Electoral Voting Machines (EVMs) have been the subject of intense discussion and dispute after the recent State elections when a major part of the electoral votes went in favour of BJP, giving it a thumping majority in the State Assembly.

After the recent Uttar Pradesh and Punjab Elections, many opposition leaders alleged that the EVMs were tampered with by the political party ruling as the central government, to gain votes in its favour. On 12th April 2017, the opposition political parties led by Congress President Sonia Gandhi met the President of India and submitted a memorandum alleging that the EVMs were not tamper-proof and that it was necessary to revert to paper ballot in the future elections. This move triggered a controversy and debate in the media about the soundness of EVMs. As this allegation challenged the competence of the Indian Election Commission (EC) to conduct fair elections, the EC threw an open challenge to all the political parties and scientists to pick any EVM from their stock and verify to prove their allegation.

It was in 1999 that the Indian Election Commission first used Electronic Voting Machines on a trial basis in some Assembly constituencies. Shri T S Krishna Murthy, the then Chief Election Commissioner of India decided to use EVMs in all the 543 Parliamentary Constituencies for the first time in the 2004 General Elections.

"It took us more than two years to plan, organise and prepare for using EVMs in all the constituencies. At that time, we used nearly 1 million machines for the General Elections. The machines were manufactured by two Public Sector organisations viz. Bharat Electronics (Under the Ministry of Defence) and Electronic Corporation of India Ltd (under the Atomic Energy Department of the Government of India). These machines are like calculators. The programme in the machine is burnt into a one-time programmable chip or masked chip and it can never be altered or tampered with. A high level technical team, headed by Dr Indiresan, Director of the Indian Institute of Technology (IIT) made a thorough examination of the technology and cleared it for use in the General Elections. The introduction of EVMs saved more than 10,000 tons of paper, thereby saving thousands of trees at every election", said T S Krishna Murthy.

According to T S Krishna Murthy, even in 2004 there were allegations about EVMs by some political parties. He permitted anyone and everyone to examine the machines for any irregularity in the presence of a technical team. But nobody could find any flaw. He also added that after introduction of EVMs, there is no invalid votes. There is also speed as the counting is done quickly and results announced without delay in few hours, which normally used to take long time when paper ballot was used.

It is observed that whenever a political party loses, its representatives immediately attribute their loss to faulty EVMs, rejecting the verdict of the electorate that had decided to vote against them. When sitting political leaders lose their seats in the elections, they invariably attribute the outcome to faulty EVMs and never accept the defeat as the verdict of their electorate. However, when they get elected in the subsequent elections, they quietly accept the verdict given by EVMs and do not reject the verdict that won them their electoral seats. Since 2004, there has been three cycles of General Elections to the Parliament and three cycles of Assembly Elections that were conducted in the country without any controversy. There has been change of guard in the Governments both at the Centre and in the states. If we examine the electoral results of the State Assembly elections held earlier this year, BJP won in the state of Uttar Pradesh (UP) while the Congress won in the northern state of Punjab. Interestingly, the opposition parties alleged faulty EVMs only for the UP Eelection results, but have accepted the verdict of the EVMs for the victory in Punjab.

When the present ruling party, the Bharatiya Janata Party (BJP) lost in the General Elections in 2009, they too had blamed faulty EVMs for the results. The Election Commission had then challenged the political parties to prove their allegation that the EVMs were not tamper-proof. But no one could establish any proof to substantiate the allegation against faulty EVMs. Instead, one of the political leaders of BJP, GVL Narasimha Rao wrote a 230-page book titled 'Democracy at Risk', alleging irregularities in the election process because of faulty EVMs. The party veteran, L K Advani had written the Foreword for the book and the book was released with great fanfare.

In 2014, when BJP won more than 280 seats in the Lok Sabha earning a thumping majority, they did not reject the results based on their earlier allegation. Instead they now defend the reliability of the EVMs. It is the turn of the opposition party, the Congress along with other opposition parties to blame the EVMs for their electoral defeat.

Interestingly, in the 1971 General Elections, when the then ruling party with its leader, Indira Gandhi swept the elections against the grand alliance of all opposition parties, all the opposition parties had then attributed Indira's victory to a 'magic ink'!

Notwithstanding all the allegations, the political parties do not realise that in their selfish pursuit, they are damaging the image of the country and questioning the credibility of the Election Commission of India which is a world class institution and the pride of India.

There are two types of complaints about the EVMs:

1. The voter is entitled to know to which political party he has voted for. The present system does not provide that transparency.

2. The programme can be manipulated to favour a single party. Hence, India should revert to paper ballot. Incidentally, many advanced countries still do not use EVMs.

In response to a writ petition filed by Dr Subramanian Swamy, Member of Parliament, the Election Commission had offered to introduce VVPAT (Voter Verified Paper Audit Trail). In VVPAT, when a voter presses a button in the EVM in favour of a candidate, he will see a print out of the paper trail with the symbol of the candidate through a covered glass window. The paper trail will fall within that box and it will not be accessible to the voter. The Election Commission has assured that VVPAT will be introduced in all the 543 constituencies in the 2019 General Elections. For this purpose, the Election Commission has withdrawn all the EVMs manufactured before 2006 and is now substituting them with new M3 EVMs which are compatible with the VVPAT device.

For the purpose of writing this article, the Editorial Team discussed with the politicians who had complained against EVMs, some IIT Professors and some senior officials of the Public Sector Companies manufacturing these machines.

In addition to the security features that were available in the earlier models of EVMs (M1 & M2), the new M3 EVM produced after 2013 have additional features like Tamper Detection and Self Diagnostics. The Tamper Detection feature makes the EVM inoperative the moment anyone tries to open the machine. The Self Diagnostic feature checks the EVM fully every time it is switched on. Any change in its hardware or software will be detected.

Nearly 1.5 million EVMs are being used by the Election Commission. The machines are numbered and kept in a high security area. There is a 'Standard Operating Procedure' for handling and movement of EVMs. When the Parliament and Assembly elections take place, EVMs are moved across different states. For example, if 100,000 machines are required in the state of Karnataka, they are acquired at random from two or three distant states. These machines are kept under highest security till they are moved to the polling booths. EVMs are allotted at random to polling booths. Before the commencement of the poll, polling officials demonstrate the use of EVM with a mock poll before all the contesting candidates. The machines are under the surveillance of close-circuit cameras and security officials. Tampering of the machines and replacing its chip is impossible. If anyone attempts to tamper with the machine, it becomes inoperative. Since the EVMs are allotted at random, it is totally not possible to guess the order in which the candidates are listed and then to manipulate the chip. Every machine is accounted for like a currency note.

45 days after declaring the results, if there is no court case, the data is removed from the machines and kept under security. The machines are then moved to another state for another election, depending on the requirement.

Indian EVMs are stand-alone machines like calculators. They are not computers and not connected to the internet. They cannot be operated through the Wireless, WiFi, Bluetooth or the Mobile Phone. In India, Public Sector Organisations manufacture these EVMs, unlike other countries where they are manufactured by private companies. It is for this reason that some countries withdrew the use of EVMs as they faced legal issues.

India is the only country where the Election Commission is a constitutional body. With more than 800 million voters, the Indian Election Commission has made every Indian proud of the free and fair conduct of polls with high level of transparency. Some geopolitical forces are bent on tarnishing the image of India and its proud institutions. It is important that our country's political parties do not fall prey to this mischief for their own selfish interest, and be lured by these geopolitical forces. They should examine the reasons for the outcome of the elections instead of blaming the EVMs, and then work out strategies to win back the confidence of the electorate.

By K. Srinivasan, Editor in Chief